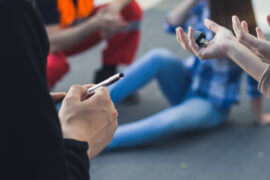 A person in Rahway, New Jersey has a 1 in 854 chance of being the victim of a violent crime. Of course, no one would want to be the person who was harmed or injured, but being the one accused of assault can be just as difficult. The State of New Jersey wants to limit the number of violent crimes occurring in this state and it therefore assigns the authority to police to arrest anyone accused of assault, a violation of statute section N.J.S.A. 2C:12-1. Accordingly, assault charges of varying degrees can be filed against individuals young and old, related and unrelated, in relationships and among people with no prior knowledge of one another except for the incident in question. The crime of assault under 2C:12-1 can be alleged between husband and wife, strangers, friends or acquaintances, or by or against law enforcement. But assault offenses are not one-size-fits-all. Depending on the case and the allegations, these criminal charges are lodged as either disorderly persons offenses or alleged as felonies.

If you have been charged with a simple assault or an aggravated assault offense in Rahway, you should find out what can be done in your defense. At our criminal law office, we know that intent is subjective. What the police or the victim allege is only an accusation and may not represent what really happened or what your intentions were, much less what you may have been responding to. Digging into the evidence, police reports, and allegations by witnesses and alleged victims is imperative to uncover the truth and pinpoint the path toward your most favorable result when charged with assault. For a complimentary consultation about your Rahway assault charges, contact (908) 838-0150 today.

Determining the Degree of a Rahway Assault Offense

The governing assault statute in New Jersey criminal law is N.J.S.A. 2C: 12-1. In complete simplicity, assault is the actual or threatened harm committed against another. The offense of assault is either a felony crime (indictable offense) or a disorderly persons offense. Simple assault is a disorderly persons offense, whereas aggravated assault is a second, third, or fourth degree felony. Given the choice between the two offenses, a disorderly persons charge for simple assault is preferable, as it has less penal impacts than aggravated assault offenses. The particular situation is important for grading an assault offense, as the level of injury, the presence of a weapon, and sometimes the role of the victim can influence the degree of the crime.

Overall, the harm caused in an assault case is categorized as basic bodily injury, serious bodily injury, or significant bodily injury. As a general rule of thumb, the more severe the injury, the higher the degree of the crime. For example, for those causing significant or serious bodily injury, the level of crime is a second or third degree, while more minor injuries result in complaints for fourth degree crimes or disorderly persons offenses. However, the correlation between the injury and the degree of crime does not exist when weapons are involved. In cases involving deadly weapons, the degree of the crime and the ensuing severity of punishment hinges on your intentions. Basically, what matters in cases involving deadly weapons is the intention of the person committing the act. To some degree, the act itself is considered to be equally as important as the reckless or negligent element of it.

While the term “assault with a deadly weapon” sounds egregious or exceptionally violent, the charge can actually be filed as a disorderly persons offense and not a more serious felony. Subsection (a)(2) of the simple assault statute permits such a complaint to be filed if it is determined that you negligently caused bodily injury to anyone with a deadly weapon. A person acts negligently if a substantial risk of harm is present and they ignore that risk by simply failing to notice that it existed. Negligence is not defined as an accident, but it is closely related, in that injuring the other person was not your purpose or intention.

Unlike a simple assault, a felony aggravated assault is filed when it is the actor’s purpose or intent to cause bodily injury to another person with a deadly weapon. The bodily injury can be actual, meaning that it occurred, or attempted, meaning something you tried to do. If bodily injury is caused or attempted, you will be charged with a third degree indictable crime. Lastly, if an injury was caused recklessly with a deadly weapon, the crime will be of the fourth degree. A person can be said to be reckless when they consciously ignore a substantial risk to others and do something in spite of the risk.

What is Considered a Deadly Weapon in a Rahway Assault Case?

The definition of a deadly weapon is not as obvious as one might imagine. Of course, firearms readily come to mind when thinking of deadly weapons, but the law does not limit the list of weapons to such devices. Deadly weapons are any objects, devices, or materials that could be used to cause death or serious bodily injury. The object must also be one that an objective observer, such as the victim, reasonably believes is capable of such harm. The definition of a weapon is fairly fluid in an assault case but it may readily conjure images such as knives, daggers, bats, gases, explosives, or broken bottles. Essentially, any object that is available during the altercation can be considered a deadly weapon if the circumstances are right.

If the conduct involved amounts to simple assault, the person is charged with a disorderly persons offense. The case for simple assault is handled in Municipal Court for the City of Rahway. All disorderly persons offenses have maximum punishments of $1,000 in fines, 6 months in jail, and mandatory court fees and penalties. The potential punishment is greater if the assault charges filed against you are for an indictable crime.

A charge for aggravated assault may be a fourth degree, third degree, or second degree crime. The case is then sent to Union County Superior Court. For a third degree crime, a maximum sentence as carried out by the Superior Court Judge, is 5 years in prison and $15,000 in fines. Third degree criminal charges are alleged when there is an act of domestic violence such as strangulation, an act causing significant bodily injury, the act of pointing a firearm at law enforcement, acting with intent to cause injury with a deadly weapon, and also when one commits a simple assault upon law enforcement, teachers, or emergency service workers, among others. The lowest level of assault in the felony range is a fourth degree crime. This crime is alleged in cases of assault by auto and sometimes when a person points a firearm at another. The lowest of all felony offenses still allows the judge to impose a prison sentence up to 18 months and $10,000 in fines.

Further, the possible punishments for aggravated assault do not stop here, as many assault offenses are charged as the highest degree of crime available under the statute. Second degree aggravated assault claims can be alleged in cases where a person eludes law enforcement and injures another in the process, or where emergency personnel have been significantly injured. It can also be alleged in cases involving more serious injuries during which the accused displays an extreme indifference to the value of life. It is precisely because the injuries are more severe or the risks were so high that the court must sentence the person to prison. For crimes of the second degree, unless sentenced otherwise, you are facing a minimum of 5 years in prison. The maximum jail term is 10 years and a maximum $150,000 fine exists as well.

Charged with Assault in Rahway NJ? We can Assist You

Simple assault and aggravated assault are closely related and even law enforcement can make mistakes differentiating between the two, but both have the potential to cause problems for your reputation, your record, and your ability to stay out of jail. When facing assault charges in Rahway, finding the right criminal defense lawyer to have on your side is crucial. The legal analysis of the charges is best left to defense attorneys who understand the law and the ways to challenge key components of the case against you. With over a decade defending clients charged with assault offenses of all kinds throughout New Jersey, each of the lawyers at our firm is fully equipped to defend your case. If you would like to discuss your specific assault charge, we encourage you to contact (908) 838-0150 to speak with an attorney right away. Consultations are always provided at no cost.