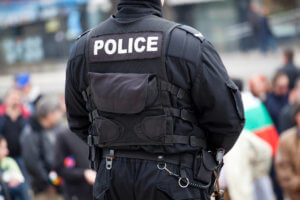 Assault is a violent crime that carries severe penalties in New Jersey. Aggravated assault is a particularly violent type of assault that can result in enhanced charges and extremely harsh penalties being imposed against the offender. N.J.S.A. 2C:12-1(b) sets forth the conditions for an aggravated assault charge to be filed against an individual. The criminal statute specifically identifies police officers as a unique class of victims who are afforded special protections against being physically attacked or assaulted. This matters a great deal because the standard for your assault charge could hinge on the identity of the alleged victim. When an assault is committed against a police officer, the criminal charges can be enhanced to an even greater degree and the penalties imposed will be even harsher for those proven or pleading guilty. Moreover, since NJ prosecutors and judges want to discourage these kinds of attacks against law enforcement, you can expect a stiff prison sentence if you are ultimately convicted.

Need a Lawyer in Union County for Assault on an Officer

With the seriousness of the allegations that you’re facing in mind, it is important to seek knowledgeable legal guidance from a criminal defense attorney with experience handling cases involving assault on police. If you have been charged with aggravated assault on a law enforcement officer in Union County, NJ, in towns such as Elizabeth, Plainfield, Scotch Plains, Clark, Cranford, Mountainside, Rahway, or Roselle, contact our office at (908)-838-0150 to speak with a talented criminal defense lawyer about your case and learn more about how we can help you during a free consultation.

When an assault is committed against a police officer, it usually means the offender will face the more serious charges for aggravated assault. This is because the NJ criminal code includes special protections for certain categories of people, such as law enforcement officers, firefighters, emergency medical responders and EMTs, school employees, Division of Child Protection and Permanency (DCPP) employees, state judges, bus drivers, corrections officers, public utility workers, and doctors, nurses, and other health care workers. If you are accused of assaulting a police officer or someone else in one of these other groups, NJ prosecutors can file aggravated assault charges against you, violating N.J.S.A. 2C:12-1(b)(5)(a). Keep in mind that this is true even if you were merely involved in a minor scuffle with the police officer. Whereas you might ordinarily be charged with a lesser offense for simple assault, the fact that your physical altercation involved a law enforcement officer will mean that enhanced charges for aggravated assault are appropriate.

How do People get Charged with Assaulting Police in Union County NJ?

Some common scenarios that can give rise to criminal charges for aggravated assault on a police officer in NJ include the following:

In many cases, people charged with felony assault on law enforcement face additional charges for resisting arrest, obstructing the administration of law, hindering apprehension or prosecution, and similar offenses in connection with the same incident.

In most instances, an assault that does not cause “serious bodily injury” to the victim will be classified as a simple assault. A simple assault charge should be taken seriously, but the reality is that it carries the least severe penalties and often results in the defendant avoiding jail entirely by being sentenced to probation. The same is not true of an aggravated assault charge: these criminal charges are handled at the highest level and often result in the convicted defendant being sentenced to a lengthy term of incarceration. So, what might prompt a prosecutor to file aggravated assault charges instead of simple assault charges? The deciding factor is typically the degree of injury sustained by the victim. If the victim in your case suffered permanent disfigurement or scarring, lost the use of an extremity or organ, or required hospitalization for an extended period of time because of their injuries, you might be charged with aggravated assault.

If you have been charged with assault on an officer in Union County, do not hesitate to contact our firm anytime, day or night, at (908) 838-0150 or by sending us a message for a free consultation with an experienced criminal defense lawyer who can advise and assist you further. We are available 24/7 to best serve your needs.