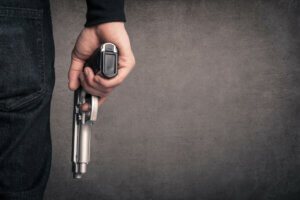 In the heat of passion, you might react with regrettable actions or do something without intending to that scares someone else, like pointing a gun at them. Even if you never intended to do anything more than get your point across in the most dramatic way possible or frighten anyone else, know that brandishing a weapon is a serious crime in New Jersey. In fact, you could be charged with a third degree indictable offense or a fourth degree indictable offense, depending on the situation in your case. For instance, pointing a gun at a law enforcement officer raises the severity of the crime and the potential sentence. Even the lowest-level aggravated assault charge for brandishing a weapon is a felony charge that could land you in prison. If you have been charged with a crime for brandishing or pointing a weapon anywhere in Union County, New Jersey, such as Elizabeth, Linden, Union Township, Cranford, Clark, Mountainside, or another town nearby, contact the criminal defense lawyers at Proetta & Oliver for answers and immediate assistance with your defense. You can reach out to us online or contact our office in Cranford at (908) 838-0150 for a free initial consultation

Charged with Aggravated Assault for Pointing a Firearm in New Jersey

In New Jersey, all types of brandishing a firearm offenses come with a prison sentence. The legislature meant to punish those with intent to callously threaten someone with injury or death, and there are two distinct levels of aggravated assault by pointing a firearm.

Pointing a gun at someone, waving a gun at someone to scare them, or presumably threatening to shoot someone may lead you to a criminal sentence to prison for up to 18 months, not to mention a $10,000.00 fine. If the state proves that you had a weapon and pointed, wielded, or brandished it at another, regardless of the danger such behavior causes to another, you could be charged with aggravated assault under N.J.S.A. 2C:12-1b (4). Aggravated assault for pointing a firearm at someone is a fourth degree indictable crime.

To be prosecuted for fourth degree aggravated assault by brandishing a weapon, the state must first prove that the defendant aimed the gun at someone and did not accidentally point the gun in another’s direction. They must then prove that the circumstances show the defendant had a callous disregard for another’s life in doing so. For example, someone pointing a gun at another human being in anger not only frightens the other person, but risks their life. Even if they did not intend to shoot, the gun could accidentally go off, the person could be so scared that they have a heart attack, or the victim fearing for their life might assault or kill the brandisher in self-defense. And lastly, the weapon can be any type of weapon that fires a volatile or deadly charge, like bullets, balls, slugs, gas, fire, or explosives.

Crimes of the Third Degree

New Jersey law categorizes pointing a real gun, fake gun, or laser sighting at a police officer as a more serious indictable crime. Pointing what looks like a gun or laser sighting at an officer is a third degree crime. And it does not matter whether the defendant believed the gun was empty or that the gun was empty of ammunition. What matters is the intent of the brandisher and the belief of the victim. When the accused intentionally points a gun toward an officer and the officer believes that they could be shot, that is all it takes to prove aggravated assault.

Third degree aggravated assault for brandishing a weapon or laser sighting at an officer means you intentionally pointed a weapon, fake weapon, or laser sighting in the direction of an officer, knowing it was an officer, even if you did not necessarily aim it at them. So, whether the gun, fake gun, or laser sighting device is directly pointed at the officer’s body or just nearby, the state can charge the defendant with brandishing a weapon at an officer. This is a third degree crime punishable by 3 to 5 years in prison and a possible $15,000.00 fine. The crux of the crime is the action being sufficient to make an officer believe that they are under threat of being hurt.

The higher grade of this crime makes sense because law enforcement officers who believe that a weapon or what they believe is a weapon or laser sighting is pointed at them may cause them to fire their weapon in defense or cause many officers to shoot at the pointer. Police work is tense; officers are on constant high alert for being shot at and so will react defensively quicker than most people. Moreover, no matter the weapon, a handgun, rifle, shotgun, bb gun, toy gun, pellet gun, air rifle, or other devices that look like a gun, the statute applies if the gun faces an officer. And a laser sighting device does not even have to be pointed in the officer’s direction. It has the same effect, though. A laser sighting is attached to a gun to pinpoint a target. So, even if the laser sighting or something that projects a light beam that looks like a laser sighting is on a fake weapon or an unloaded weapon, an officer does not know that and may believe they are targeted for a kill.

Common Charges that go Along with Brandishing a Weapon in NJ

It is important to note that brandishing a weapon may yield additional charges upon arrest. For example, if the defendant does not have a proper permit for the handgun they brandished, they might be charged with illegal possession of a firearm (unlawful possession of a weapon). Or, they may be charged with possessing a weapon for unlawful purposes. For example, these charges are common when someone is accused of committing a robbery, kidnapping, or sexual assault. Having a firearm in your possession to commit a crime is a second degree crime. If convicted, those who commit a second degree crime are facing the reality that they may be forced to spend 5 to 10 years in prison and pay hundreds of thousands of dollars in fines.

Second degree indictable felony crime convictions carry a presumption of imprisonment, so it is an uphill battle to rebut that presumption. As such, diversionary programs, like the Pre-Trial Intervention program may not be options, even for a first-time defendant, without help and aggressive defense work by a knowledgeable criminal attorney. Moreover, certain gun crimes are governed by the Graves Act, which affects sentencing. A person convicted of gun crimes like illegal gun possession, is required to serve a mandatory minimum sentence before reaching the opportunity for parole.

The consequences of being charged with pointing a gun can be catastrophic, but that does not mean that those accused of aggravated assault and accompanying weapons crimes have no defense. There are many ways our team of Union County NJ criminal defense attorneys can help you defend yourself if you face brandishing charges. First, we can examine the facts of your case and see if the prosecutor may have problems proving the crime or crimes charged. Second, we can scrutinize the details of your arrest to make sure that the officers followed the law and appropriately respected your constitutional rights. Third, our defense team can raise sound arguments as to why some charges should be dropped or reduced when the circumstances warrant it, thus reducing the punishments you face. And finally, our lawyers may be able to help get your conviction and sentencing diverted into a probationary program, which could allow you to avoid prison and a criminal record altogether.

If you have been charged with pointing a firearm or related charges in Westfield, Scotch Plains, Summit, Warren, Green Brook, Manville, or elsewhere in Central New Jersey, do not hesitate. Find a talented representative to stand by your side and receive a free consultation by contacting our office at (908) 838-0150.