Can I get Deported for a Criminal Charge in NJ? 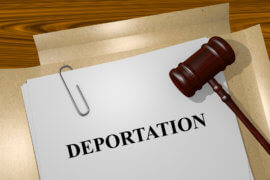 Everyone dreads being arrested, but if you are not a United States citizen, an arrest can go from an inconvenience to a life-altering event. Arrests and resulting convictions on certain charges can threaten your immigration status and even lead to removal proceedings or deportation in New Jersey. The federal government has recently stepped up enforcement efforts in this area, and local police departments in NJ do not take lightly to anyone who they suspect has committed a crime. Criminal law and its effects on immigration in New Jersey is complicated, so you should consult an attorney with experience defending clients facing criminal and immigration consequences about your specific case. Our skilled criminal defense lawyers have successfully assisted many clients charged with criminal offenses with the potential of deportation in Union County and throughout NJ. Contact us at (908) 838-0150 today to find out how we can help you. We are always available to provide free consultations.

Can I Face Deportation for a Crime in New Jersey?

There are several types of crimes that can increase your risk of removal or deportation or otherwise jeopardize your immigration status in New Jersey. Some of the specific crimes and types of charges that can get you deported are explained below.

Can You be Deported for a Felony?

If you commit an aggravated felony or its equivalent under New Jersey law (felony-level crimes are typically known as indictable offenses in NJ), you can potentially be deported. Some of the felony crimes that can lead to deportation include: murder, sexual assault, possession of a controlled dangerous substance with intent to distribute, money laundering over a certain amount of money, using guns, bomb, or other explosives to commit a crime, possession or distribution of child pornography, forging or counterfeiting a passport or other documents, perjury, certain violent assaults and batteries, gambling or racketeering crimes of sufficient severity, and certain other violent crimes with punishment lasting more than a year.

Potential Deportation for a Crime of Moral Turpitude

In addition to aggravated felonies, a category of crimes referred to as “crimes of moral turpitude,” can jeopardize your immigration status. A crime of moral turpitude is defined generally as a crime that shocks the conscience as being inherently base, vile, and against the rules of morality. These crimes can include certain domestic violence offenses, theft crimes, burglary, arson, forgery, certain prostitution offenses, tax evasion, and hindering apprehension or prosecution, among others. If you are convicted of a crime of moral turpitude, your immigration status could very well be at risk, and you should seek defense counsel immediately.

Are there Other Offenses that Can Hurt my Immigration Status?

Certain firearm offenses, certain drug offenses, sustaining multiple convictions (particularly for crimes of moral turpitude), and a number of other criminal charges can also put you at risk of being deported. There are even some disorderly persons offenses that can jeopardize your current status as a non-citizen in New Jersey.

Criminal Charge Could Affect my Immigration Status in Union County, What Should I do?

If you have been arrested for criminal charges and are not a U.S. citizen, it is imperative to understand your rights and legal options. Contact the seasoned Union County criminal defense attorneys on our team now to discuss your specific case. With local offices in Cranford, we defend clients in Elizabeth, Clark, Union Township, Berkeley Heights, Mountainside, Summit, and throughout NJ. (908) 838-0150.