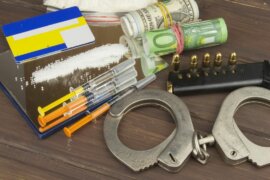 Anyone who is arrested for a drug offense in New Jersey needs to have a qualified criminal defense attorney on their side because many of these offenses can result in considerable jail or prison time, especially if the charge is for distribution of a controlled dangerous substance (CDS) such as heroin, cocaine, or prescription drugs. When it comes to drug crimes, however, one of the most serious charges a person can face is for being the Leader of a Narcotics Trafficking Network. This charge, also known as a Drug Kingpin charge, carries the most severe penalties in the NJ Criminal Code: a conviction comes with a life sentence to prison.

What is the Leader of Narcotics of Trafficking Operation?

The charge for Leading a Drug Trafficking Network is addressed in the New Jersey Criminal Code by N.J.S.A. 2C:35-3. The statute specifically focuses on the individuals who finance, organize, manage, or supervise an illegal drug distribution operation. This means that if you are accused of providing financial support in the form of cash or credit to others involved in a narcotics trafficking network, you could be criminally charged as the leader of that organization.

The same is true if you helped to arrange or devise plans for the illegal drug operation, managed the operations of the drug trafficking network in any capacity, or acted in a supervisory capacity over anyone else involved in the operation. Basically, if you were more than just a low-level participant in the criminal enterprise, it’s possible that you could be charged under the statute.

What must be Proven for a Drug Kingpin Charge Conviction in New Jersey?

Prosecutors often try to cast a wide net when bringing these kinds of drug charges against the people who participated in a drug trafficking organization in order to gather evidence and encourage plea deals that involve testifying against the actual leaders of the operation. Thankfully for defendants, there are limits to exactly who can be charged with a Drug Kingpin offense.

If the case goes to trial, the prosecutor must prove certain individual elements to secure a conviction under N.J.S.A. 2C:35-3:

How Bad are the Penalties for Leading a Drug Trafficking Network in NJ?

Since the charge for being the Leader of a Drug Trafficking Network is classified as a first degree indictable offense, one would expect the possible penalties to include substantial prison time, heavy fines, and a permanent criminal record. But this type of drug offense gets special treatment in the NJ Criminal code, and it is different from other first degree indictable offenses. For example, most first degree crimes have a sentencing range of 10-20 years in state prison, which means that the harshest punishment that can be handed down by the judge in those cases is a 20-year prison sentence. By contrast, a first degree charge for Leading a Drug Trafficking Network can result in a maximum sentence of life in prison.

There are other penalties for Leading a Drug Trafficking Network, including a fine of either $750,000 or five (5) times the street value of the illegal narcotics that were trafficked, whichever figure is higher. While the financial penalty might seem insignificant in comparison to lifetime imprisonment, the reality is that losing hundreds of thousands (or even millions) of dollars can have a negative impact on you and your family going forward. Another penalty that may be imposed for a Drug Kingpin offense is the suspension of your driver’s license for a period of (2) years if and when you are released from prison on parole.

When you are charged with being the Leader of a Drug Trafficking Network, you can still face other, lesser charges for related drug offenses such as distribution of heroin, distribution of cocaine, or illegal distribution of prescription drugs. This could matter a great deal because even if you are able to beat the most serious Drug Kingpin charges, you may still be convicted on the other charges and face prison time and other penalties. Moreover, if you are convicted of Leading a Drug Trafficking Network, you can still be convicted and sentenced for the other offenses as well. That’s because these charges do not merge under the statute, and any prison sentences imposed by the judge in your case can be imposed consecutively so that they are essentially stacked on top of each other.

It’s very possible that you were not actually a Drug Kingpin, and that you’ve been wrongly accused of being the leader of a drug trafficking operation when you were really just a low-level participant. But that might not matter if you are ultimately convicted on the charges. The reality is that you could be sentenced to life in prison and your life could be destroyed. That’s why you need to have an experienced criminal defense lawyer on your side to negotiate with the prosecution and to raise strong defenses on your behalf if the case does eventually go to trial. You can’t play games with the rest of your life when facing life in prison for a N.J.S.A. 2C:35-3 charge.

Our criminal defense firm is prepared to fight for your life and your future no matter where you were arrested in the Union County area, such as Plainfield, Cranford, Elizabeth, Union Township, Rahway, Linden, Roselle, or Westfield. Call us immediately at (908) 838-0150 to discuss your drug kingpin charges and get a jump on your best defense.