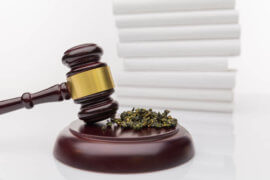 The town of Clark was named after Abraham Clark, one of the signers of the Declaration of Independence. This forward-thinking individual and those like him assisted in making our nation free from British Rule and providing more freedoms for American citizens. Unfortunately, no matter how progressive Mr. Clark may have been, neither he nor the state of New Jersey has granted individuals unfettered independence to possess marijuana. Possession of marijuana is still a crime violating New Jersey’s controlled dangerous substance laws, for which you may face jail among other harsh consequences. In essence, you may possess marijuana in New Jersey if you have a prescription for the substance and it was obtained in accordance with that prescription. Marijuana obtained with a prescription is acquired at a dispensary. You cannot go to your friend’s house, hand him your marijuana card, and pick up some weed. Similarly, you cannot grow it for yourself. And lastly, if you do not have a prescription, you cannot possess the drug without running the risk of being arrested.

So whether you are in your car riding along the Rahway River Parkway, Central Avenue, the Turnpike, or the Garden State Parkway, you may be arrested and charged with violating N.J.S.A. 2C:35-10a if found in possession of marijuana anywhere in Clark. This is true in any locale within Clark’s border, such as Madison Hill, Picton, Ashbrook, Lenox, or Florence Mills. Of course, police can also arrest you in bordering towns outside of Clark such as Westfield, Linden, Rahway, Edison and the like. Regardless of where your marijuana charges have been filed in Clark or nearby, our attorneys have the knowledge and foresight to assist you with preparation and execution of your top defense. Contact a Clark marijuana defense lawyer at our firm now for further information. You can reach us at (908) 838-0150 and consultations are always provided free of charge.

Today, unless things change, possessing unauthorized marijuana can mean you are charged with a criminal offense in New Jersey. Under the current policy, the police must confiscate marijuana when found in a person’s possession without a prescription. Upon arrest, officers log it into police evidence and charge you with the appropriate degree of crime. It is not a defense to possess marijuana that you bought it legally in another state. In other words, the drug sniffing dogs at the airport will not let you slip by just because you arrived from Amsterdam where you made a few purchases from one of their notorious coffee shops. If the dog gets a hit on you, chances are you will be arrested. Likewise, law enforcement does not care that you went to visit your college best friend in Portland and came back with a few marijuana party favors. What happens next remains to be seen, solely dependent on the weight of the drug and whether you are a suspected marijuana user versus a distributor.

Clark police can justify an arrest for marijuana if you are in possession of less than 50 grams, in which case your summons will direct you to Clark Municipal Court. For this disorderly persons offense charge, jail for up to 6 months may be imposed in addition to fines amounting to $1,000. Also be prepared, as the judge can suspend your right to drive in this state for up to two years. Conversely, if you had more than 50 grams in your possession, your case will be transferred to the Union County Superior Court in Elizabeth. As if being held in jail overnight isn’t punishment enough, if found guilty of this fourth degree offense, you could spend the next 18 months in prison. It gets worse if the marijuana weighs in at one ounce or more, as you could be charged with a marijuana distribution offense in the third degree.

While possession of marijuana can seem like a minor, reasonably trivial offense, to the courts of New Jersey, it is no laughing matter. In the eyes of the law, you face criminal penalties just like everyone else accused of violating the NJ Criminal Code of Justice. The law is clear and the fact patterns throughout the state repeat themselves when individuals are arrested and charged with possessing marijuana. With over 10 years of experience each, our defense attorneys know what roads to take when working to maintain your freedom. For a free consultation about your Clark, New Jersey marijuana case, contact us today at (908) 838-0150.