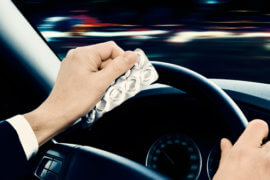 New Jersey law makes it illegal to drive under the influence of alcohol or drugs. If police suspect that you are driving impaired by a drug, they have a series of steps that they will use to try to prove it. Knowing police procedure when dealing with people suspected of DUI is very important when you are facing DUI charges. It is also of paramount importance to your defense, which is best handled by an experienced New Jersey DUI attorney.

How do they Prove I was Driving on Drugs in Cranford?

If you are pulled over in Union County or elsewhere in New Jersey and an officer suspects you are driving on drugs rather than alcohol, it is very likely that they will introduce you to a specialized officer known as a Drug Recognition Expert (DRE). This officer will ask you to participate in a battery of tests known as a Drug Influence Evaluation. Drug Recognition Experts can present powerful testimony regarding whether you were too impaired by a particular drug to drive with the care and caution of a sober person under like circumstances, which is the standard applied in New Jersey DUI cases.

Drug Recognition Experts (“DREs”) are highly trained police officers who are certified by their local police agency’s DRE program and by the International Association of Chiefs of Police (IACP). The Drug Recognition Expert program originated with the Los Angeles Police Department prior to being standardized and made available nationwide through the National Highway Traffic Safety Administration and recognized by the IACP. New Jersey and jurisdictions both nationally and internationally employ these police experts to assist law enforcement in identifying the category of drug and level of impairment displayed by individuals arrested for driving under the influence of drugs.

Before you are formally charged with DUI on drugs, you may be asked to submit to a drug influence evaluation. A drug influence examination is a standardized, twelve-step sets of tests that DREs put a suspect through to determine whether they are under the influence and/or impaired by certain categories of drugs, including Central Nervous System depressants like Zoloft, Prozac, and Phenobarbital; Benzodiazepines like Xanax; Central Nervous System stimulants like meth, cocaine, and Adderall; hallucinogens like mushrooms, MDMA, and LSD; narcotics like opium, morphine, and heroin; dissociatives like PCP and ketamine; inhalants like nitrous oxide and acetone; and, of course, cannabis (marijuana). Each of these unique categories of drugs can result in a set of distinctive symptoms of physical and mental impairment that DREs can identify during a drug influence examination.

A drug influence examination typically consists of a breath alcohol test (more to rule out the presence of alcohol than to detect it), an interview with the arresting officer who referred you to the DRE, a preliminary examination of external symptoms and a pulse reading, an eye exam, a set of field sobriety tests like the walk and turn, one leg stand, and a Modified Romberg Balance test, a reading of vital signs like blood pressure, temperature, and pulse, a dark room examination to determine pupil size (among other things), an examination of muscle tone (some drugs, like PCP, result in extraordinarily rigid muscles, while others relax them – most notably Soma, a common muscle relaxer), a check for injection sites or “track marks” and another pulse reading, an interview with the arrestee, the formation of a formal DRE opinion on drug influence and impairment, and a final toxicological examination consisting of a chemical test (typically blood, urine, or saliva).

How do I beat a DUI Case with Drugs in Linden?

Typically, a New Jersey prosecutor will call a DRE to the stand to testify regarding the signs and symptoms of drug impairment that she or he observed when you completed the drug influence examination. The DRE will give an opinion as to whether, based on the information gathered through the evaluation, you were able to drive a car as well as sober person prior to your arrest. If that opinion is no, the judge will weigh the DRE’s opinion, coupled with the other evidence involved in your case, before determining whether to find you guilty of driving under the influence.

In order to successfully beat your charges for DUI in NJ, it is highly advisable to have your case reviewed by a highly trained DUI defense lawyer. Our attorneys have extensive training and credentials in the realm of driving under the influence law and we use it to our clients’ advantage on a regular basis. To find out how we can help you with DUI charges in Mountainside, Elizabeth, Linden, Cranford, Scotch Plains, Berkeley Heights, New Providence, Green Brook, or anywhere else in Union County, call our local office today at (201) 793-8018 or contact us online. We provide free consultations and someone is available immediately to assist you.