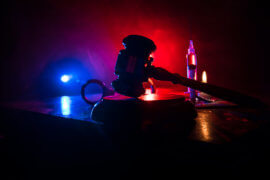 Drugs have been plaguing our country for years, including Union County, New Jersey. This is true whether you live in a major city like Elizabeth or in a nearby suburb like Clark. To combat addiction, the State of New Jersey has implemented treatment hotlines and assistance programs, in addition to changing laws to allow insurance companies to extend time spent in substance abuse treatment centers. Nonetheless, authorities can and do charge those found in possession of controlled dangerous substances (CDS) on a regular basis. If accused of violating N.J.SA 2C:35-10 in Clark, New Jersey, you will be charged with an indictable crime or a disorderly persons offense. This statute criminalizes the possession of certain drugs for personal use.

In Clark Township in 2016, the Mayor called the local Police Department the backbone of the community. During the preceding year, the police received over 2700 hours of training as a means by which to be most ready to assist the town in various ways. Some of this training likely had to do with drug crimes and arrests. The time and money spent by the town for the purposes of protecting the community can be assumed to result in more vigorous law enforcement and protection, and ultimately, more arrests for CDS offenses. Toward that end, the Clark police department, Municipal Prosecutors, and Union County Prosecutors are ready to make the case against you in court. If they prove you guilty of drug possession in Clark, depending on the particular degree of the charge, you may face imprisonment for anywhere from 6 months to as much as 5 years.

CDS is an abbreviation for Controlled Dangerous Substance. If you review your criminal complaint, it will state the time and date of the charge, the alleged facts, the nature of the charge, and will use the abbreviation CDS. When the law uses this term or charges you with possession of CDS under N.J.S.A 2C:35-10, it means that there is an allegation that you possessed a drug that is illegal or possessed a certain substance like marijuana without a prescription.

The drugs for which you can face drug charges are listed on one of the Five Schedules of Controlled Dangerous Substances. These lists are created by the government to outline substances according to addictive properties and medically accepted value. Simply put, drugs that have no treatment value or those which cannot be prescribed by a doctor are illegal to possess, such as cocaine, heroin, methamphetamine, PCP, and Ecstasy (Molly). As a result, you will be charged with an indictable crime if found to be in possession of such drugs.

On the other hand, some of the individual CDS schedules contain substances that can be prescribed by a doctor because they do have some medically-accepted benefits. Regardless of whether these prescription drugs are highly addictive or have minimal negative effects, they do require a prescription to possess anywhere in New Jersey. So, if you are caught with these substances without a prescription, you will be charged with a drug offense.

What Constitutes Possession of Drugs in Clark NJ?

Overall, you can be charged criminally for having possession of certain controlled dangerous substances (CDS). In order to be charged, the police must allege that you possessed a substance. There are different ways in which a person is said to “possess” drugs, whether it occurs actually or constructively. Essentially, possession does not always mean that you had the drugs on your person. Often, police charge individuals who are in constructive possession of CDS. This term refers to the ability of a person to take possession of the drug, although it is not found directly on him or her. If it is believed that you had the knowledge of and ability to control the drug, you can be charged with constructive drug possession. This often occurs in the context of motor vehicle stops in which two or more people are jointly charged with possession of CDS.

For instance, what if you and your buddy were traveling along Raritan Road and you end up pulled over. Unbeknownst to you, your friend throws the drugs that were in his pocket under the passenger seat towards the back of the car. When the officers approach the car, they find a reason to request that you and your friend exit the vehicle, which they then search for drugs. They find the stash but neither your friend nor you claim ownership. As a result, the cops charge both of you with drug possession. Conversely, if a friend left the marijuana, cocaine, or heroin in his pants’ pocket and the officer finds it on him, he may be the only one to face drug charges, as he was considered the only person that actually possessed the drug.

Next, the police will have to file a complaint for possession of a controlled dangerous substance. The degree of the offense may be graded differently depending on the type of drug involved. Specifically, it may be a disorderly persons offense, a third degree, or a fourth degree crime. It is imperative to know the drugs and the corresponding degrees of drug possession charges, plus the weight needed to sustain such a charge.

You may be charged with a disorderly persons offense for possessing less than 50 grams of marijuana. This is not a felony. For this offense, you will attend Clark Municipal Court. The sentence you may receive includes as much as 6 months in jail, a $1,000 fine, a $500 DEDR penalty, and a potential license suspension if convicted. Possessing over 50 grams of marijuana is a fourth degree crime. If you possess less than 200 milligrams of codeine, less than 100 milligrams of dihydrocodeine or opium, less than 50 milligrams ethylmorphine, or 2.5 milligrams or less of diphenoxylate, you can be charged with a fourth degree crime as well. For this level of crime, you will attend Union County Superior Court. If convicted, you could be sentenced to prison for up to 18 months. The marijuana can cost you $25,000 in fines, and the other medications up to $15,000. On top of that, each has a mandatory $750 DEDR penalty and minimum 6 months’ loss of license. The judge may also order that you serve 5 years probation.

Furthermore, you will be charged with a crime of the third degree for possessing any amount of cocaine, heroin, methamphetamine, LSD, or MDMA. The punishment for this level of drug possession offense includes a prison term of 3-5 years. In addition, you could be required to pay as much as $35,000 in fines. You may also be sentenced to probation or worse yet, probation and jail.

Can a Clark NJ Drug Possession Lawyer Fight my Case?

If you or anyone you know have the misfortune of being charged with drug possession in Clark, New Jersey, you need an aggressive attorney who will fight for the best outcome available to you. Fighting the case can include filing motions to have evidence thrown out or it may mean getting you into a program that results in dismissal.
For example, if the judge agrees that police wrongfully searched you, your car, belongings, or any other place in which you have a right to privacy, the drugs cannot be used as evidence. Alternatively, some may want to go with the sure bet and apply for a diversionary program like PTI. If the criminal division and prosecutor find that you are eligible for Pretrial Intervention (PTI), the case will be postponed and the charges dismissed if you meet all conditions. Another alternative for those with more extensive criminal histories is Drug Court. Through this program, you may avoid jail time and have your entire criminal record expunged upon successful completion.

If you are facing CDS possession charges in Clark NJ, help yourself by calling our office at (908) 838-0150 today for a free consultation. With years of background in drug defense, our experienced lawyers are ready, willing, and able to fight for you.