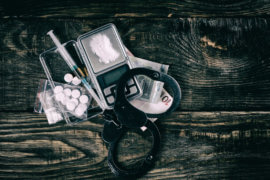 If you have been charged with possession of a controlled dangerous substance in Roselle, you will be arrested, charged by way of complaint or summons, and the case will be sent to either of two courts. Drug possession and other criminal offenses charged as indictable crimes in the Borough of Roselle will be heard in Union County Superior Court and lower level offenses are prosecuted in Roselle Municipal Court. Not all who have been charged are guilty of the offense, but they will often take the wrap to avoid trouble. Taking the blame for something you did not do can come back to haunt you and threaten your otherwise bright future. Do not take the weight of the world on your shoulders by claiming that the drugs were all yours. Instead, let William A. Proetta and our experienced Roselle drug defense attorneys take on the stress of your criminal case for drug possession. We have represented countless people who have stood in your shoes throughout the Union County area, providing the most sound, informative legal counsel and skillful defense that only years of experience in criminal defense and local courts can provide. You can reach out for a free consultation 24/7 by calling (201) 793-8018.

Roselle is located in Union County, New Jersey. Route 27 is the main road throughout the town of Roselle, often the site of vehicles being pulled over and subsequent police activity.  What starts as a traditional motor vehicle stop for some traffic infraction such as speeding, failing to stop, or failing to maintain a lane, can end up in criminal charges for possession of a controlled dangerous substance (CDS). You can be charged with the offense even if the drugs are not yours but are located inside your vehicle. All criminal offenses have penalties whether they are indictable crimes, disorderly persons offenses, petty disorderly persons offenses, or violations of municipal ordinances. In New Jersey, commonly charged drug possession offenses and penalties include:

Sometimes, people traveling together have common interests.  The common interest can be illegal and can include such activity as recreational drug use.  But just because you hang around with people that do drugs, possess them, or sell them, does not mean that the drugs that have been found belong to you. Sometimes, you are just the person to blame because you have no criminal record. For example, your friend is driving the car with you and two others along Route 27.  As you pass the intersection of North Wood Avenue, you spot a cop and suddenly hear the sounds of sirens. The front seat passenger tosses a bag to the back of the car and tells you to “hold it.” You grab it and stuff it in the front pocket of your pants. You did it without thinking and just wanted to get through the stop without any issues. You further think to yourself that there is no harm no foul, as you have no prior offenses, are not on probation, and have nothing to worry about.

After the driver pulls off to the shoulder, the cop approaches the car. He peers in the passenger side window and eyes everyone up and down as he is suspicious.  He finds a reason to get everyone out of the car and a search ensues. He asks you if you have anything to hide and believing that he is on your side, you tell him you have drugs in your pocket but they are not yours. He searches you and the plastic baggie and finds 5 oxycodone pills, methamphetamine, marijuana, mushrooms, and an unknown leafy substance believed to be synthetic marijuana. No one else in the car will help you and they all deny ownership.

In a shocking move, the officers put handcuffs on you and put you in the squad car.  They take you to the station and later place you in jail while the prosecutor’s office decides whether to hold you on a warrant, or they process you and release you on a summons complaint. The cops give you a chance to tell them the “truth” and you do, but they do not believe you. The officers charge you with third degree crimes for illegal possession of cocaine, meth, and mushrooms, as well as unlawful possession of oxycodone, a fourth degree crime for the synthetic marijuana and and a disorderly persons offense for possession of marijuana. After such an ordeal, you will then be forced to attend court to defend yourself.

Should I just admit the drugs were mine when charged with drug possession in Roselle NJ?

Understandably, sometimes it makes sense for you to take the blame for something your friend did. It could be that you keep missing work for court, that you are the only one without a record,  that you feel pressure by others, or that you cannot handle the stress of your ongoing case. Whatever you choose, we understand and make no judgement about such decisions. However, your decision to plead should be made voluntarily and while understanding all of your options. The stakes are high in criminal cases and as a lay person, you may not know what you are getting into when making a false confession and claiming ownership of drugs. Taking the blame for others conduct will mean that you are unfairly saddled with a criminal record. You should also be aware that even if you decide to take the weight for the drugs, the prosecutors do not have to dismiss the charges against your co-defendants, as they may be said to have jointly possessed the substance(s). In essence, your confession could have all been for naught.

Anyone who pleads guilty to a criminal offense will have a criminal record. Employers can see this information and choose not to hire you. The stigma alone of a criminal conviction can cast shadows on your integrity, making your future questionable. Additionally, you may be afforded your only opportunity to obtain a dismissal through Pre-Trial Intervention (PTI) or conditional discharge. These programs are only offered once and if you make another mistake, the court will not care about your explanation. Before you go to court, make sure you understand all of the consequences of your decision to plead and consider talking through all of your options with a qualified lawyer.

Whether it be marijuana, cocaine, MDMA, heroin, or another controlled substance that led to your drug possession charges, our Roselle drug possession lawyers will explain the ups and downs and ins and outs of your case and what we can do to help. Depending on the situation, we can discuss motions to suppress the evidence as well as motions to toss your confession if you made one. Having represented clients charged with all manner of drugs in Roselle Municipal Court and Union County Superior Court, we have the practical experience and insider knowledge to assist with reaching your most favored outcome. Call (201) 793-8018 or send us a message if you would like to speak with an attorney free of charge.