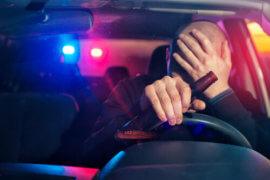 No one is immune to DWI charges – and that includes police officers, firefighters, doctors and even fellow attorneys in our community. And over the years our DWI lawyers have had plenty of these cases involving high profile clientele and public servants. Our law firm recently defended a successful local lawyer who had been pulled over and charged with driving while intoxicated after blowing through a stop sign and tailgating the car in front of him. Our client appeared to make matters worse after he got into a heated confrontation with the police officer after being stopped.

After a review of the evidence, it appeared that our client benefited from a significant a delay between the time he was pulled over and actually gave a sample of his breath to determine the amount of alcohol in his system. This was because the arresting officer was working construction detail and had to pass him off to other officers. Then after getting back to the police station it was determined that their Alcotest machine was not working properly so they had to transport him to another police station to conduct the test which resulted in even further delay. In the end, when they finally obtained his breath samples, he had a mix of borderline readings between 0.08% and 0.07%. Based on the circumstances, he was arrested and booked for DWI as well as some companion charges.

Our client was adamant that he could not get convicted of the DWI. The arrest had already generated news by being published on several online websites and news feeds and we knew we had our hands full because obtaining a complete dismissal of a DWI is always a tall order. We started by requesting all the evidence the police had obtained against our client. Throughout the process, the prosecutor took a hard stance against our client and his DWI charges. So we began systemically challenging the state’s case over the course of several months, including obtaining an expert report to refute the scientific evidence the state was trying to use against our client. As we were approaching the day of trial, the prosecutor finally conceded that the challenges to their evidence were too overwhelming for him to continue to proceed. As such the court entered a directed verdict of “not guilty” on the DWI and our client agreed to plead guilty to the tailgating offense with a 45 day loss of license. If you have been charged with a DWI and are interested in how our Union County DWI lawyers can help you, contact our office today for a free consultation.