DWI with a Child in the Car in New Jersey 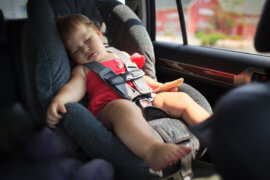 A DWI is serious enough, and comes with such severe penalties, that you don’t want to have to worry about other consequences. But there are certain circumstances in which your DWI charge could carry enhanced penalties and lead to even more devastating outcomes, including criminal charges and the loss of custody of your children. That’s exactly what could happen if you are convicted of a DWI with a child in the car. New Jersey authorities have cracked down on DWI offenses with a minor out of an abundance of caution and a widely held belief that children should not be exposed to health and safety risks, including death in fatal accidents caused by drunk drivers. As a result, NJ prosecutors often seek maximum penalties in drunk driving cases when a child was present in the vehicle.

If you are arrested for DWI/DUI, you may be subject to a number of harsh punishments, ranging from driver’s license suspension, to alcohol education classes, an ignition interlock device, community service, and possible jail. And yet, if you are arrested for a DWI or DUI offense with a child in the car, you will face even tougher penalties than those imposed for a standard drunk driving offense. Beyond that, there could be additional criminal charges for endangering the welfare of a child as well.

N.J.S.A. 39:4-50.15 imposes an enhanced penalty for driving under the influence of alcohol when the offender is a parent or guardian and a minor was a passenger in the car at the time of the drunk driving offense. This extra penalty is separate from the other penalties imposed under N.J.S.A. 39:4-50, which addresses DWI charges more generally. Since a DWI with a minor charge only applies in certain situations, it is necessary to understand how particular terms are used in the statute:

Tragic Consequences for Drunk Driving with a Child 39:4-50.15

As set forth by 39:4-50.15, anyone who is convicted of operating a motor vehicle while intoxicated and with a minor seated in the vehicle can face a disorderly persons charge that carries additional punishments. The penalties imposed under this section of the statute include the following:

Keep in mind that these penalties are in addition to any other penalties that might be attached to the underlying DWI charge. As such, anyone facing a DUI with a minor charge will need a specially trained and experienced DWI defense lawyer to address the evidence of intoxication, the probable cause for the traffic stop, and any other issues that might arise in their DWI case.

Since Driving While Intoxicated is technically classified as a traffic offense, the charges are usually handled in the local municipal court in the city or town where the DWI allegedly occurred. The same is true for a disorderly persons charge for driving drunk with a child passenger. As a result, DWI charges and disorderly persons charges typically don’t result in significant jail or prison time.

What makes a DWI with a minor charge unique is that it can also lead to very serious criminal charges for endangering the welfare of a child. Child endangerment charges are addressed in the New Jersey criminal code by N.J.S.A. 2C:24-4, which stipulates that any person responsible for the care of a child under the age of 18 and who abuses or neglects the child is guilty of a second degree felony. A conviction for endangering the welfare of a child can result in the defendant being sentenced to a term of incarceration of 5-10 years in state prison and fined up to $150,000. It is also important to note that this charge has a presumption of incarceration, which means that even a first-time offender with no prior arrests or convictions is likely to face an automatic prison sentence if convicted.

Another possible consequence of a charge for endangering the welfare of a child is that you could lose custody of your child if you are ultimately convicted. Depending on the circumstances of your case, it’s possible that your DWI charge could trigger an investigation by the Division of Child Protection and Permanency (DCPP) and a series of hearings to determine whether you should be allowed to retain custody.

Aside from the more serious penalties for a criminal charge, there are other key differences between a criminal case and a DWI case. One of the biggest differences between the two types of charges is the court process for each. When an individual is arrested for a DWI, it is classified as a traffic offense. This means that the case will be handled in the municipal court located in the municipality where the DWI offense happened. Municipal court cases are always decided by a judge because there are no jury trials at the municipal court level. Additionally, the penalties that can be imposed by a municipal court judge are somewhat limited, as the defendant can be sentenced to jail time, but not prison time. Beyond that, the prosecutor in a drunk driving case is limited in the kind of plea deals they can make because plea offers are not technically allowed for DWI charges.

When an individual is charged with endangering the welfare of a child in connection with a DWI case, the court process is very different because child endangerment is a criminal offense, not a traffic offense. For starters, the case will be handled at the superior court located in the county where the offense allegedly happened. The child endangerment charge will first be sent to the county prosecutor, who will need to secure an indictment from a grand jury before the case can proceed to trial. This is because child endangerment is classified as an indictable offense, and therefore it requires an indictment. If a grand jury issues that indictment, then the case will be scheduled for trial in superior court. By contrast, a DWI charge at the municipal court level does not require an indictment before proceeding to trial.

The good news is, there are numerous opportunities to secure a better outcome before an indictment or trial, including at the Pre-Indictment Conference. There may be valid defenses that can be raised to get the case dismissed. Additionally, the prosecutor may have flexibility to offer a plea deal that allows the defendant to plead guilty to a lesser offense and avoid the most serious penalties. The stakes for a criminal charge at the superior court level are incredibly high since a conviction on second degree child endangerment charges stemming from a DWI offense can result in the defendant being sentenced to significant prison time. With the consequences that may happen if convicted, a strong defense from an aggressive criminal and DWI defense attorney is essential.

Overall, it is imperative that anyone facing a DWI with a child charge speaks to a knowledgeable defense attorney as soon as possible. With decades of combined experience defending criminal and DUI cases, our attorneys will be able to examine the evidence in your DWI case, determine whether probable cause existed for the traffic stop in the first place and if there are other viable defenses, possibly negotiate with the prosecutor to get the charges downgraded, or head to trial to litigate the case and fight to get it dismissed altogether. Contact us if you are facing charges for DUI with a minor in Union Township, Cranford, Clark, Plainfield, Berkeley Heights, New Providence, or elsewhere in Union County, NJ. We can assist with a free consultation and zealous defense representation. Call (908) 838-0150 to talk to a lawyer about your case today.