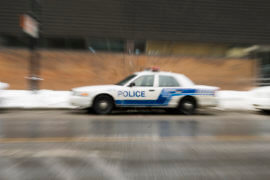 Take this case as an example. On Monday, Union County Prosecutor Michael A. Monohan announced that two men who were convicted of second degree eluding and resisting arrest were sentenced to a combined total of 40 years in prison. The two men were from New York and were being investigated for narcotics offenses. While police in Linden were pursuing the defendants, the men attempted to elude the officers, but crashed their vehicle into a tree in a Union County park. After taking the men into custody, the police found cocaine in their crashed vehicle.

What are the penalties if convicted of eluding police?

Eluding is typically a third degree indictable offense, carrying a potential penalty of three to five years of imprisonment, but it can be charged as a second degree offense if you create a risk to another person’s life or of serious bodily harm while eluding the police. If you are convicted of second degree eluding, you may be sentenced to five to ten years in prison.

I was charged with eluding in Union County, NJ. What happens next?

After you are charged with eluding, you will appear before a judge either the same day, the following day, or Monday morning, depending on when you are arrested. During this appearance,  the judge will explain the charges against you. You do not need to enter a plea at that time, which means you do not need to tell the judge whether you are innocent or guilty of the charges. In fact, it is best not to volunteer any information and simply answer the judge’s questions directly.

After you have your first appearance, the Prosecutor will decide whether to move for detention or not. This essentially means they will either submit a motion to have you kept in jail or allow you to be released immediately. If the Prosecutor moves for detention, you will have a detention hearing to determine if you should be released pending your trial or remain in jail. Your detention hearing may take place on the same day as your first appearance or it could be a few days later. New Jersey has done away with a traditional bail system and moved to a formulaic, risk-based assessment for determining whether a defendant should be detained or released.

Unfortunately, if you have been charged with eluding, you may not score well in one of the risk assessment factors: whether you are a flight risk. If the police have established probable cause to charge you with eluding and, therefore, trying to get away from the police, then the judge may be more likely to find that, if you are released, there is a high risk that you will not appear in court for your trial and order you to be detained pending trial. It is essential to have an experienced criminal defense lawyer arguing on your behalf at your detention hearing to demonstrate that you are not a flight risk or a danger to the community.

In New Jersey, indictable offenses—like eluding—carry the right to an indictment by a grand jury and a trial by jury. Eluding charges in Union County are heard at Union County Superior Court, located at 2 Broad Street in Elizabeth, NJ 07207. Your case may be resolved in a plea agreement with the prosecutor or it may proceed to trial, the outcome of which will spell serious implications for your future.

If you have been arrested and charged with eluding in Union County, NJ, it is crucial that you obtain the representation of an experienced criminal defense lawyer. Contact our firm today at (908) 838-0150 for a free consultation.