How Long Will it Take Before Weed is Legal in New Jersey? 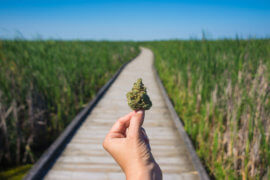 In a joint hearing last Monday, the New Jersey Senate budget committee and the Assembly appropriations committee voted to approve a bill that, if passed, will legalize marijuana for adult use and permit the growing and selling of the drug, subject to taxes and regulations. The entire process is far from completed, as the full Legislature must vote to pass the bill and New Jersey Gov. Phil Murphy must sign it into law.

If you have been arrested for weed and have questions about how emerging laws on marijuana in New Jersey impact your rights, our experienced criminal defense lawyers at Proetta & Oliver are available to navigate you through the legal process ahead. If you need assistance with marijuana charges before a municipal court or superior court, we are happy to review your case. Contact us today at our local office in Cranford for a free consultation. We can be reached at (908) 838-0150 or by message to answer your questions and fight for the best possible result.

The State of Marijuana in New Jersey Today

Currently, possession of marijuana in New Jersey is allowed only for medicinal purposes with a valid medical prescription. You can be charged with a disorderly person offense, also known as a municipal marijuana offense, if you have 50 grams or less of marijuana in your possession or if you have drug paraphernalia. With potential sentences of up to 6 months in jail, these municipal marijuana cases take up a lot of the resources of law enforcement and municipal courts in New Jersey. In addition, African Americans in New Jersey are disproportionately arrested for marijuana possession, at a rate of nearly three times that of caucasians in the state.

Reasoning that marijuana use is widespread, lawmakers who support a bill to legalize the drug say it will enable the state government to tax and regulate an industry that already exists and will continue to exist. New Jersey Governor Phil Murphy has indicated his support for the legalization of marijuana and has urged New Jersey lawmakers to approve such legislation.

When is Weed going to be Legal?

The recent joint hearing approving a legalization bill for advancement to the full legislature is only the first step in many before adults in New Jersey will be able to smoke, grow, or sell marijuana. Even when and if a bill is passed and regulations are put in place, selling and growing marijuana will be highly regulated and taxed at a rate that has yet to be determined.

So how long will this process take? New Jersey may see a bill passed in 2019, but it could take longer. There have already been multiple versions of the bill and many amendments made. Even if the last version of the bill is passed by the full Legislature, it must then be signed into law by Gov. Murphy. We do not yet know whether he supports the bill currently before the Legislature, but his administration has had disagreements with NJ lawmakers regarding the appropriate tax rate on marijuana.

What if Pot is Legalized in NJ?

If the proposed marijuana law is passed, New Jersey would become the second state in the nation to have a marijuana industry regulated as an act of the legislature. The Cannabis Regulatory Commission will be set up once a bill passes and will be responsible for making rules related to growing, selling, and using marijuana. This will include vetting businesses who wish to be involved in the industry and issuing businesses with licenses. The Commission will also be responsible for conducting inspections of businesses to ensure compliance with all rules and regulations.