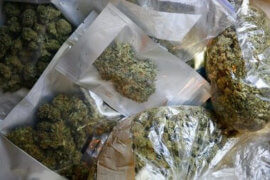 Our Union County marijuana lawyers recently defended a young man who was arrested for marijuana possession after school officials searched a locker which contained our client’s property and found marijuana inside. Our client was a high school student but was already 18 years old so he was charged as an adult. A conviction or even probation could have seriously hurt his prospects of going to a good college upon graduation. So our attorneys dug in and got ready for a long drawn out fight which took almost 8 months of litigation but achieved a fantastic result for our client.

The whole thing started because a school official was walking by when they believed they smelled marijuana and traced the search back to an unlocked locker. After searching the locker it became evident that the clothing and belongings in there belonged to our client. While searching through the belongings the school personnel found a bag containing several grams of marijuana. The police were called and our client was subsequently arrested for marijuana possession. Once at court, our attorneys requested several pieces of crucial evidence and even had an order signed compelling the state to produce missing items including the laboratory results of the marijuana confiscated and tested. Eventually the state was able to produce everything we had requested and upon analyzing all the evidence it became obvious to us that the state had a big problem – the locker was unlocked, accessible to the public including other students, and our client denied that the marijuana was his. Based on these issues, we filed a motion to dismiss the case arguing that the court could not prove the marijuana belonged to our client through the legal theory of “constructive” possession. In the end, the prosecutor conceded and the charges were amended to a local city ordinance which only carried a nominal fine and no criminal record.