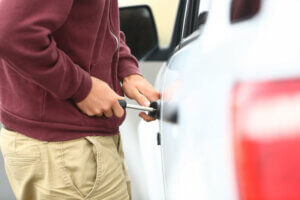 Theft is a very serious criminal act that carries severe penalties in New Jersey, and motor vehicle theft is considered a special type of theft crime that carries even harsher punishments for anyone who is convicted. Typically, motor vehicle theft is punishable by up to 5 years in prison, but special circumstances may lead to enhanced charges for carjacking, which is the most serious type of indictable offense in New Jersey. Regardless of the scenario, auto theft is always classified as a felony. For anyone who has been charged with motor vehicle theft in NJ, the consequences can be dire. That’s one reason why there should be a sense of urgency if you’ve been accused of auto theft. Do not wait to speak with a criminal defense lawyer who can assess your individual situation and devise the most effective approach to handling your defense.

The experienced criminal defense attorneys at Proetta & Oliver have vast knowledge and practical skill when it comes to applying and leveraging the law in our clients’ favor when facing motor vehicle theft charges and related crimes such as burglary, receiving stolen property, carjacking, and joyriding. With a commitment to securing the most advantageous outcome, we will tactfully navigate the pitfalls of the legal process as we represent you against the prosecution. Whether your auto theft charges arose in Westfield, North Plainfield, Cranford, Clark, Union Township, Linden, Elizabeth, Mountainside, or elsewhere in Union County, trust that our lawyers can help. Contact us at (908) 838-0150 or fill out our online form to arrange a free consultation.

Criminal charges for stealing a car in New Jersey are governed by N.J.S.A. 2C:20-3 of the NJ Criminal Code. The law doesn’t specifically mention auto theft, but more broadly addresses theft of any type of movable property by unlawful taking or disposition. In the context of an automobile theft, a person can be charged under the statute if they take a car, truck, or other vehicle with the intent to permanently deprive the lawful owner of the vehicle. Since the intent of the defendant is an element of the offense that the prosecutor must prove at trial in order to secure a conviction, it may be possible to beat the charge (or at least get it downgraded) if your attorney can show that you were going to return the vehicle to its owner.

Although motor vehicle theft is technically grouped with other kinds of theft of movable property in NJ criminal cases, there are unique aspects of an auto theft charge, as well as unique penalties that often apply in these cases. For example, auto theft is always classified as at least a third degree indictable offense (a felony), regardless of the value of the vehicle that was taken. In this way, auto theft differs from other types of theft. In most instances, the degree of a theft crime is determined by the value of the stolen property. Since motor vehicle theft is automatically at least a third degree crime, it carries the possibility of substantial prison time for anyone who is convicted at trial in Superior Court, specifically 3-5 years in state prison Moreover, when the value of the stolen vehicle is greater than $75,000, the charges could be elevated to a second degree offense, which carries a possible penalty of 5-10 years in prison.

There are also a number of additional penalties that may be imposed in an auto theft case, including the following:

While auto theft charges are addressed in N.J.S.A. 2C:20-3, joyriding charges are addressed in N.J.S.A. 2C:20-10. As set forth by the respective statutes, there is an important legal distinction between auto theft and joyriding, and it could come into play in your case regardless of which charge you initially face. Since one of the elements of an auto theft charge is that the offender intended to permanently deprive the owner of their vehicle, the prosecution must show that the taking was not temporary. By contrast, you may be able to beat a charge for motor vehicle theft, or perhaps get it downgraded to a joyriding charge, if you or your attorney can show that you had every intention of returning the vehicle after taking it for a short ride. The idea behind this legal distinction is that kids – as well as adults – might make a foolish mistake and take a car that doesn’t belong to them “for a spin,” and this sort of error in judgment is not the same as actually stealing a car.

If an experienced criminal defense lawyer is able to get your auto theft charges downgraded to joyriding charges, it can make a huge difference to the outcome of your case. There is a significant reduction in the penalties that may be imposed for a joyriding conviction. While auto theft is classified as a third degree felony with a possible sentence of 3-5 years in state prison, joyriding is a fourth degree felony with a maximum sentence of 18 months in prison. Beyond that, given the lower degree of a joyriding charge, the judge in your downgraded case may be more likely to impose probation or some other kind of alternative sentencing option that allows you to avoid prison entirely.

Charged with Carjacking for Stealing a Car in New Jersey

One of the most serious crimes a person can be charged with in New Jersey is carjacking. Although carjacking and auto theft tend to overlap, there is a significant distinction, as carjacking always involves the threat of violence. Keep in mind that you do not have to actually assault or injure the owner of the vehicle in order to see your charges elevated from auto theft to carjacking. The mere threat of violence – even the implied threat of violence when a firearm or other weapon is brandished – while attempting to take control of the vehicle is enough for authorities to bring carjacking charges against you. Similarly, if you are accused of stealing the car and then driving away with occupants still inside the vehicle, you could face charges for carjacking.

If prosecutors opt to charge you with carjacking instead of a more typical auto theft charge, it can have catastrophic consequences for you. While auto theft is classified as a third degree offense with a sentencing range of 3-5 years in prison, carjacking is a first degree offense that carries a minimum sentence of 10 years in prison, as well as a 5-year period during which the offender will be ineligible for release on parole. Moreover, carjacking offenses are treated differently than other first degree felonies, and they have a much higher maximum sentence that can be imposed: up to 30 years in state prison. That’s because lawmakers determined that the violent nature of carjacking offenses, which often involve physical assaults and the use of deadly weapons, warrants a sterner penalty to discourage future offenders.

Another charge that’s related to auto theft is Receiving Stolen Property. As the name of the charge suggests, a person can be charged with receiving stolen property when they acquire any kind of movable property that they believe was probably stolen. This means that even if you did not steal the motor vehicle, you can still face serious felony-level charges that carry significant prison time. Depending on the value of the car or truck that was taken, a conviction or guilty plea could result in a sentence of 5-10 years in prison. One of the necessary elements of a receiving stolen property charge that the prosecution must establish at trial in order to get a conviction is knowledge. In other words, the prosecutor needs to prove that you knew the motor vehicle had been illegally acquired in the first place. Depending on the circumstances of the case, however, the prosecution’s burden of proof could be lower. For example, if you have previously been convicted of receiving stolen property, or if you are a car dealer or someone else who is in the business of buying and selling automobiles, then your knowledge may be presumed by the court.

If you have been charged with a crime or are facing multiple criminal charges for motor vehicle theft in Union County, do not hesitate to contact us 24/7 at (908) 838-0150 for a free consultation with an experienced criminal defense lawyer who can help. Our team is ready to discuss and defend your case in Scotch Plains, Green Brook, Roselle Park, Rahway, Summit, Berkeley Heights, and surrounding areas. Call today for immediate assistance of counsel on your auto theft case.