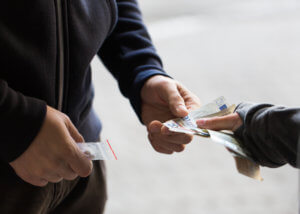 If you or someone you love is facing charges for drug trafficking in New Jersey, it is vital to obtain the representation of an experienced criminal defense lawyer right away. New Jersey law treats all drug crimes seriously, but federal drug trafficking charges can result in some of the most severe penalties. It is important to understand the difference between drug distribution charges and drug trafficking charges in New Jersey, as these offenses are handled in different legal venues and can result in very different consequences. The lawyers at Proetta & Oliver are highly experienced in the area of federal law and criminal procedure in the U.S. District Court of New Jersey. We understand the nuances of the federal criminal process and will use this to your advantage from the moment we become involved in your case. To speak with a New Jersey federal defense attorney about your specific involvement in a drug trafficking investigation, contact our Cranford office today at (908) 838-0150. We offer free confidential consultations.

What is the Law on Drug Trafficking in New Jersey?

Drug trafficking is a state, national, and international concern. It is more than simply selling or distributing drugs in New Jersey. Drug trafficking involves a network of narcotics manufacturing and/or distribution in what is often a nationwide or international operation. You can think of drug trafficking as the system behind and leading up to the actual sale of drugs. An individual dealer is normally only responsible for the transaction they conduct personally, which may be high in volume, but pale in comparison to the amount of drugs involved in the back channels that supply those drugs to the dealer.

The main strategy in the war on drugs in the U.S. has been to go after the big fish—the source of the drugs. With this in mind, drug trafficking laws are not really aimed at the local street dealer. Instead, they target the leaders, financers, and individuals involved in orchestrating a scheme to manufacture and distribute drugs. However, this does not prevent middle men or participants from becoming part of a much larger narcotics investigation being conducted by the FBI, ATF, or DEA. If you are pinned as a major player or simply a person of interest, you need an experienced federal criminal defense lawyer who can aggressively protect your rights and serve as your best advocate throughout the legal process.

Can I be charged with drug trafficking for transporting drugs in my vehicle in NJ?

While many people think of drug trafficking as simply transporting drugs, these are not the same thing under state and federal laws, but they may overlap in a federal drug trafficking case. If you are stopped by police in New Jersey and they discover that you are transporting drugs such as heroin, cocaine, marijuana, or prescription medications in your vehicle, you will most likely be charged with possession of a controlled dangerous substance (CDS) or possession of CDS with intent to distribute, depending on the volume of drugs discovered in your car at the time of your arrest.

Drug trafficking charges are placed against organizers, managers, financers, and supervisors of schemes to manufacture and distribute drugs, but not necessarily the individuals actually transporting them. However, there may be other facts in your case that give law enforcement probable cause to charge you with drug trafficking in those circumstances. Also, it does not preclude the U.S. Attorney’s Office from charging you with a federal drug crime in an attempt to “flip you,” or turn you into an informant against the upper echelons of the organization. Drug trafficking laws do not only apply to the leaders of drug trafficking enterprises and many times, it is the mere participants who get caught in the cross-hairs.

If you have been arrested or recently learned that you’re a person of interest in a federal or state narcotics investigation in New Jersey, an experienced criminal defense attorney is an essential asset at this critical time in your life. If you’ve been contacted by police or questioned about your involvement or knowledge of a drug manufacturing or distribution scheme, our attorneys can work to prevent you from being indicted. If you have been formally charged with drug trafficking, our legal team is equipped to handle all facets of your case, from initial discussions with federal agents, to negotiations with members of the U.S. Attorney’s Office, and ultimately, to devising the most effective trial strategy to combat your federal criminal charges. For more information about how we can assist you, contact our local office in Union County at (908) 838-0150. Consultations are provided free of charge.