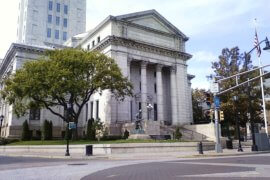 What is a Pre-Indictment Conference?

What Happens at a Pre-Indictment Conference?

If you are charged with an indictable crime (also known as a felony) in Union County, New Jersey, your pre-indictment conference will take place at the Union County Superior Court located at 2 Broad Street in Elizabeth, NJ 07207. You will receive a notice with the date and time of your pre-indictment conference with this address printed on it. Typically, you will appear before a judge for your first appearance and a detention hearing if the prosecutor is recommending that you be detained pending trial, and then a pre-indictment conference is scheduled. While it is a good idea to hire a lawyer right away, you definitely want to be represented by counsel at a detention hearing, as an experienced criminal lawyer in Union County, NJ can argue for your release from detention, with or without conditions. Having a lawyer for your pre-indictment conference is also crucial because this is when you have the opportunity to consider a plea agreement, apply for a diversionary program such as Pre-trial Intervention, negotiate a better deal, or have your charges downgraded and sent back to municipal court.

At your pre-indictment conference, an experienced criminal defense lawyer who has assessed your case and the prosecutor’s offer can advise you as to whether it is a fair deal or you should pursue other options. Additionally, leading up to a pre-indictment conference, you only have limited discovery, which means you may not be able to review all of the evidence that the prosecution has against you. Typically, the prosecutor will only present the most damaging evidence they have against you, even though there may be evidence that casts down on your guilt of the charged offense(s). An experienced criminal defense lawyer who practices in Union County has not only handled countless cases through which they have gained insight into the strength of the prosecution’s case, but they also frequently handle cases against Union County prosecutors and will be familiar with their approach and personality. All of these factors come into play and can spell the difference between a positive or negative outcome in your case.

If you have been charged with a crime in Union County, NJ and have an upcoming pre-indictment conference, contact our law firm at (908) 838-0150 and an experienced criminal defense lawyer will review your case. We frequently defend clients charged with aggravated assault, unlawful possession of a weapon, eluding police, terroristic threats, burglary, and other indictable offenses in Union County and we are prepared to put our knowledge and experience to work for you. Our phones are answered 24/7 so don’t delay in getting a free consultation.