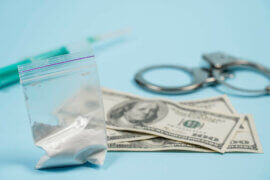 In Rahway and across the state, carrying drugs on your person, in your car, in your home, or anywhere else is risky. New Jersey law prohibits the possession of controlled dangerous substances (CDS), which are classified under the federal and state schedules. The schedules classify drugs based on their medicinal value and dangerousness for abuse, for example, whether they are highly addictive drugs, like heroin. It is illegal to possess certain scheduled drugs without a doctor’s prescription and some drugs are outright banned by law. The most dangerous and common street drugs and prescription opioids are Schedule I and II drugs. Having these drugs on you, whether in your pocket, in the glove compartment of your car, in your dorm or bedroom, or anywhere in your home and business, can lead to serious consequences. With so much riding on you successfully defending yourself, you should seriously consider getting legal help from an experienced criminal defense attorney who frequently handles drug possession charges in Rahway and throughout Union County, NJ. A Rahway criminal defense attorney is your best bet to battle for you in court. Here at our law firm, dedicated exclusively to criminal and DWI defense, our attorneys will go to bat for you with knowledge, skill, and experience on our side. Contact us at (908) 838-0150 if you would like a free consult with a Rahway drug possession lawyer today.

What happens when someone is arrested for possessing illegal drugs in Rahway, NJ

Drug possession law violations, explained in New Jersey Statute Section 2c:35-10, are usually crimes of the third degree, or perhaps fourth degree in limited circumstances. It makes a difference whether you have heroin or marijuana, which is not as likely to kill anyone and is now legal for personal use in lower quantities, though both are Schedule I drugs. And a small amount of heroin can be used against you in the same manner as a larger amount, to an extent. How much a person has makes the difference in the severity of the charge when large amounts suggest that the drugs may be for distribution and not merely personal use. Possessing enough drugs to indicate an intent to sell or otherwise distribute is a more serious crime than simple possession. And in the case of marijuana, the amount distinguishes a violation from what now constitutes legal possession.

Possessing drugs that are considered dangerous illegal street drugs or pharmaceuticals in the absence of a necessary prescription may lead to an indictable crime conviction. Indictable crimes are basically felonies, insofar as they are handled in superior court where a judge may impose a longer prison sentence and a higher fine. So, imagine if you and your friend were pulled over in Rahway on your way home. The police pulled you over for making an illegal turn, which is a traffic violation with a fine. But upon collecting your identification, insurance card, and registration, they see a plastic bag full of a white powdery substance in your center console. Suspecting the bag contains some form of CDS, the police arrest you. Now, your ticket that would have cost you a few hundred dollars has turned into an indictable crime for possessing drugs that will cost you far more in fines and possible jail time.

And your friend may be charged with drug possession too. Even though the bag of white powder was not in the hands of or on the person of anyone in the car, your friend can be charged with constructively possessing CDS if the white powder is verified as drugs. Though your friend does not own your car or may not have purchased or even known about the bag of powder, a police officer or prosecutor could assume your friend knew of the bag in plain sight and assume the friend could access and control it just as you could have. Anyone who has access to and control over some type of CDS may likewise be charged with drug possession.

A ticket could have cost you time and money in the local Rahway Municipal Court, but criminal complaints for fourth, third, second or first degree indictable crimes are filed and tried in the Union County Superior Court. So, your arrest for drug possession in Rahway may lead to multiple trips to the Union County Superior Court. Possessing CDS such as heroin, cocaine, LSD, psilocybin mushrooms, methamphetamine, or their simulated versions or counterparts, is a third degree crime. A third degree crime is serious enough for the New Jersey legislature to have attached a prison sentence to it. You risk 5 years in prison and $35,000.00 in fines if a judge gives you the maximum sentence (N.J.S.A. 2C:35-10). However, you may be able to avoid prison or even a conviction altogether if it is your first offense.

On the other hand, Schedule V drugs, like over-the-counter cough medicine, those with medicinal value but require a valid reason for having large quantities of them, are fourth degree crimes. A 4th degree indictable offense has the potential for an 18 month prison sentence. Fourth degree crimes do not carry a prison presumption, nor do third degree crimes. Thus, a judge may sentence a convicted defendant on possession with probation or the court may allow for rehabilitative alternatives, like Drug Court or the Pre-Trial Intervention program. All possession sentences come with the potential for driver’s license suspensions of up to two years.

On another level, drug distribution is based on the amount of illegal drugs. For instance, if you have five ounces or more of a Schedule I, II, or III drug, you could be charged with first degree CDS possession with intent to distribute. Distributing drugs for sale or gifts is far more serious in terms of punishment. So is possessing a large quantity of illegal drugs for dispensing near school property, public parks or public housing. First distribution charges for drugs mean much more time in prison, 10 to 20 years, and enormous fines. In the worst case scenario, you may even be charged with drug trafficking.

Though your drug charges may seem hopelessly stacked against you, a Rahway criminal defense attorney can do a lot for you.

Your attorney may question every aspect of your arrest and evidence against you. For example, they may question whether your initial stop by the police was legal. If they had no reason to stop you, then the stop and all that followed may not be allowed as evidence in the court to support the drug charges against you. In that case, the prosecutor cannot typically prove a case of possessing illegal drugs. Other questions your attorney may raise pertain to the police verification process of confirming that the substance in the plastic bag was an illegal drug. Your attorney would also want to know the information from the lab that tested the substance and the chain of custody. If the testing process was flawed, again, the evidence might be excluded from being used against you.

The arrest itself must also be legal, following the law and protections afforded to the accused by the state and federal constitutions. All of these could weigh heavily in your favor when working to have the charges dismissed or the penalties substantially reduced. Our local attorneys are ready to investigate and collaborate with you on the best defense moving forward such that your Rahway drug arrest does not mean a criminal conviction or its consequences. Talk to a Rahway criminal attorney about your CDS possession charge and options by contacting (908) 838-0150 today.