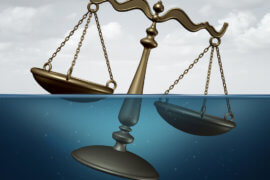 Clark Municipal Court, located along Westfield Avenue in the southern part of Union County, is home to many litigated complaints of simple assault violating N.J.S.A. 2C:12-1(a).  While the town is seemingly picturesque and cloaked in the suburban lifestyle, it is not devoid of violent activity. Simple assault is a lower level criminal offense but at its core, is violence or the threat of harm against another. Consequences such as time in the county jail, excessive fines, and a conviction on your record, as well as being flagged as a violent offender can all become a reality if the case is not handled properly. Our criminal defense team welcomes your call and we look forward to applying our knowledge of New Jersey criminal law and Clark Township simple assault charges to your case. Please feel free to contact our office at (908) 838-0150 if you would like to discuss an assault charge in Clark and find out more based on the unique facts of your case. We are pleased to offer free initial consultations 24/7 to best serve your needs.

Simple assault is a disorderly persons offense under N.J.S.A. 2C:12- 1(a). But before you can be charged with the offense, the police must allege that you:

What Happens when you get arrested for simple assault in Clark?

Upon finding probable cause and a charging of the complaint, you will be arrested, fingerprinted, and be given a summons for municipal court. If the case includes alleged domestic violence in Clark, such as simple assault upon a spouse, family member, former partner, you can be held in jail pending a detention hearing.  If you have ever had a simple assault before, the court can recommend no release due to an elevated risk of violence or danger to the victim and the community at large. Fortunately, you are entitled to have an experienced lawyer representing you at your detention hearing in Union County. That’s where we come in and can strategically show the court that your release is justified with or without conditions.

How do they prove Clark simple assault charges?

Regardless of the situation, the court requires the prosecutor to prove you guilty of simple assault beyond a reasonable doubt.  To be found guilty, it is not enough to say that a person was injured and that you caused the injury.  Specifically, the state must prove that you caused the injury purposely, knowingly, or recklessly.  Did you hit or harm the person on purpose? Was the injury your intended result? Was an injury produced by an accident during which you ignored the risk that someone would be harmed? Or did you fail to recognize a risk and act anyway, thereby causing an injury?  If the answer to these questions are yes, then you may be found guilty, provided that an injury is proven.

In a simple assault case, the injury sustained is considered minor. If the state can merely prove that someone suffered some form of pain without more, then a simple assault charge will be filed. If the person who was injured does testify, they must demonstrate to the court that some harm befell them as a result of your actions. Specifically, to be injured it means that a person suffered illness, physical pain, or impairment. In other words, experiencing hurt feelings is not enough. Conversely, a showing of serious or significant bodily injury is not required for simple assault, though it is for aggravated assault in many cases.

What if the victim wants to drop a simple assault case in Clark NJ?

In a simple assault case, it is not uncommon for the parties who were fighting reconcile. For example, the scuffle may occur between siblings, friends, or significant others. The verbal argument transforms into the physical when tempers flare or alcohol is involved. When the dust settles, the people may regret their actions and take corrective action. As a result, the injured party may wish to forego prosecution and not be willing to testify against the defendant. If no injury can be proven through testimony, the charges may be dismissed.

Is simple assault in Clark Township a felony or misdemeanor?

For a simple assault charge, this is known as a disorderly persons offense, which essentially means the same thing as a misdemeanor. Since the injury is not severe, the charge is not a felony. However, if you commit simple assault upon law enforcement, the charges will be elevated to the indictable felony crime of aggravated assault.  The difference between the two crimes is that one is a felony allowing for state prison, and the other is a misdemeanor allowing for county jail only. In the case of a felony third degree aggravated assault, the punishment is worse yet, as 3-5 years in prison is a possibility.

Will I go to jail for simple assault in Clark?

Simple assault in Clark Township does in fact, allow a judge to sentence you to the Union County Jail for 6 months. Aside from the maximum amount of jail time, the court could also sentence you to straight probation, a combination of jail and probation, or fines only that max out at $1,000.  Because the sentencing range can turn from minimal to drastic, it is important to hire someone who knows what Clark Municipal Court looks for in giving a lesser sentence and the strategies and defenses that can be used to challenge your simple assault case.

If you have been charged with simple assault in Clark, NJ, don’t let anyone take advantage of your lack of knowledge in this area.  Our attorneys have experience IN criminal law surrounding assault in New Jersey and specifically, in Clark Municipal Court and Union County Superior Court.  As such, we know when it’s time to take the case to trial and when it’s time to try for an amicable resolution. In some cases, providing a general overview of the events leading up to the simple assault can be helpful. In others, interviewing witnesses may be key in gaining an advantage. And sometimes, filing motions may be beneficial when seeking dismissal. In all cases, the experienced Clark NJ simple assault defense lawyers at our office are committed to doing everything we can to secure a firm and favorable result. We are here to provide you with a free initial consultation should you need one anytime. Contact our office at (908) 838-0150 to speak with a member of our team right away.