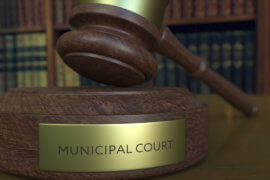 To discuss your upcoming appearance in Union Township, Linden, Westfield, Scotch Plains, Berkeley Heights, Cranford, or another local municipality in Union County, simply call (908) 838-0150 now. Our criminal defense lawyers can be reached anytime and you are welcome to call our office in Cranford for a free consultation at your convenience.

There some offenses that are more frequently heard in Municipal Court than others. Disorderly persons offenses (dp’s) and petty disorderly persons offenses (pdp’s) are almost always filed in this court unless there is a companion felony offense.  Dp’s and pdp’s are similar to indictable crimes (felonies) in that you are entitled to have a trial (although before a municipal court judge, not a jury) and are innocent until proven guilty. Similarly, if convicted of either of these types of offenses, there are jail sentences and fines that can be imposed.  The following penalties can be imposed for criminal offenses in Municipal Court upon conviction:

2) petty disorderly persons offense: $500 in fines, 30 days in jail, $125 in mandatory penalties, additional court costs and fees, probation, or a combination of jail and probation.

Many of the above cases originate from claims filed by police or by private citizens. Likewise, violations of town ordinances can also be initiated by police and townspeople, but they may be instituted by town officials or zoning/violations officers as well.

Towns across the state have the authority to enact their own rules and laws.  These are known as town ordinances.  The ordinances protect the peace and enjoyment of the town through enforcement of these rules.  Some ordinances pertain to aesthetics, such as how tall your grass can be, while others relate to the quality of life residents, like noise ordinances.

The local laws prohibit or require adherence to certain conduct or behavior. A violation of any ordinance will allow penalties previously authorized by enactment by the town. For example, in Union Township, the potential punishment for violating an ordinance in the municipal code that requires a court appearance allows for fines between $100 and $2,000, imprisonment for as much as 90 days, and up to 90 days of community service. Many towns or cities in Union County enact ordinances that preclude the following:

While these offenses are not necessarily criminal, they do require that you be proven guilty in a court of law. In other words, you are assumed to be innocent unless proven otherwise and you have a right to be heard, confront witnesses, or simply remain silent if you so choose. While rare, technically if found guilty of municipal offenses, you can be sent to jail and be forced to pay the town financial penalties as well.

Often, criminal defense attorneys and defendants find that pleading guilty to an ordinance is more desirable than being found guilty of a disorderly or petty disorderly persons offense. This is particularly true for first-offenders with otherwise clear criminal backgrounds.

Benefits of resolving your charges by way of ordinance violation

For instance, while it may show up on your record, this will not be considered a “crime” about which you would have to advise employers or potential employers.  Also, unlike a criminal offense, you will not be subject to some of the often-mandatory penalties associated with the alleged conduct. For this reason, our lawyers will often consider town ordinances as a potential means for a disorderly persons offense to be amended to or plead down to. For instance, if you have been charged with disorderly conduct, perhaps we can amend the charge to a violation of a noise ordinance, which is not a crime. In this manner, your case can be resolved by way of paying a fine, and you can move forward with your life unhindered by a criminal conviction. For example, here is a case in which we had marijuana possession downgraded to an ordinance on behalf of one of our clients.

Some people would rather have the sure bet of lowering the offense through a plea to an ordinance, as opposed to risking conviction for a criminal offense at trial. Additionally, a violation of a town ordinance can be expunged in as little as two years from the date of conviction, whereas, you must wait as much as five years to file a petition to have disorderly persons or petty disorderly persons offense expunged. More importantly, ordinances have little to no impact on the expungements of felonies or misdemeanors. As we all know, having a squeaky-clean record, free of any behavioral blemishes, helps with employability, housing, and personal growth opportunities.

Whether you want a trial, a conditional discharge or dismissal, or wish to negotiate your case, we can help. Our Union NJ municipal defense attorneys have been handling cases like yours for many years and we are dedicated to assisting you with reaching the best available resolution. For a free consultation about a disorderly persons offense or municipal ordinance violation in Union County, call us at (908) 838-0150 today.