Understanding Your Rights When Police Want to Question You 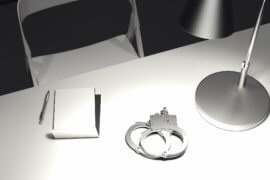 When the police try to question you, it is completely normal to feel nervous even if you are innocent and even if you do not know why they are asking you questions. Obviously, if you know or believe you may have committed a crime, you are likely to feel extra nervous when the police try to question you. But most people feel this way when asked to submit to police questioning – it’s called an interrogation for a reason. Many people are vaguely aware of their “right to remain silent” but in the moment, they forget, do not know when the right applies, or believe they can convince the police of their innocence by cooperating, offering an excuse, or supplying an alibi.

The best time to learn about your rights regarding police questioning in New Jersey is before you have ever been questioned by an officer. Knowledge is power and when it comes to the issue of possible self-incrimination, it is extremely important to understand when to remain silent and when you need to have a lawyer present. If you have been asked to come down to the police station for questioning, already had an interrogation, or have been charged with a crime, it is highly advisable to speak with an experienced criminal defense lawyer before proceeding. To discuss your specific criminal charges with an attorney, call our Union County defense law firm at (908) 838-0150. We provide consultations around the clock free of charge.

Police questioning may arise in all sorts of situations in New Jersey. If you are in an argument at a bar or another public place and someone calls the police, they may want to ask you questions. If police are called to your house about a domestic dispute, they will want to question you. The police might be investigating another person you are associated with and want to question you about your knowledge about that individual or other relevant information. This often applies when a person is suspected of selling drugs like heroin, cocaine, or marijuana. Police questioning might also come up right before you are arrested, after you are arrested on the car ride to the police station, or after you arrive at the police station and before and after charges are formally filed against you.

Do I have the right to refuse to answer questions from the police?

Under the 5th Amendment of the U.S. Constitution, you have a right against self-incrimination. This means that the government cannot compel you to speak and cause you to make statements against your interests that could lead to criminal charges or be used against you in court. This right is so fundamental to our criminal justice system, that the U.S. Supreme Court ruled that the police have a legal obligation to inform you of these rights before conducting a custodial interrogation. This disclosure is known as your “Miranda rights” and is typically given when an individual is being placed under arrest.

Specifically, the police are required to inform you that you have the right to remain silent, that anything you say could be used against you in court, and that you have a right to an attorney. Once you hear these warnings, you should remember to decline to answer any of the police’s questions and simply state that you will not answer any questions without a lawyer present.

A common misconception is that you can only refuse to answer questions from the police when and after you are arrested. However, even if the police have not read you your Miranda rights and seem to be merely conducting an investigation, you still have the right to decline to answer their questions. While you must present identification when the police request it, you have a right against self-incrimination whenever you are being questioned by the police. The general rule of thumb: speak with a knowledgeable criminal defense attorney before saying anything.

Do not think that answering questions from the police will convince them of your innocence or that invoking your 5th Amendment rights may indicate your guilt. If you invoke your right to remain silent, that choice cannot be held against you, but any statements that you make to the police can be held against you in court. If you have been contacted by police, are under investigation, or have been arrested and charged with an offense in Union County or elsewhere in New Jersey, call the law firm of Proetta & Oliver today at (908) 838-0150 for a free consultation with an attorney. From our local offices in Cranford, we practice in Linden, Clark, Roselle, Elizabeth, Union Township, Mountainside, and across the state. The lawyers at our firm are highly experienced in criminal defense and will work to ensure that your rights are protected at each stage of your criminal case.