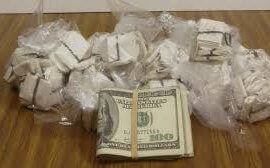 New Jersey takes drug enforcement very seriously and imposes heavy consequences on those found guilty of transporting and distributing drugs. Individuals who are charged with possession for personal use may have more options available to them, as New Jersey is concerned with the rehabilitation of individuals struggling with addiction, but if you are charged and convicted of possession with intent to distribute, the potential consequences are far less merciful.

Recently, a man from Indiana was arrested by law enforcement in Union County, New Jersey, after the police stopped him in the parking lot of a clothing store and discovered over 4 pounds of heroin in his SUV. He was charged with heroin possession with intent to distribute. The investigation was prompted by a tip regarding a drug shipment and involved joint efforts between the Union County Prosecutor’s Office, Union County Police, and the FBI.

Heroin distribution charges are not met with leniency in New Jersey, as the opioid epidemic has claimed thousands of lives each year in the state.

If you are charged with possession with intent to distribute heroin, the prosecution has the burden of proving beyond a reasonable doubt that you intended to distribute the heroin, rather than keep it for your personal use. There are several points that the prosecution can submit to the jury as evidence of your intent to distribute the drugs including evidence of an actual sale, possession of a large volume of heroin (more than would be typical for personal use), having a lot of cash on hand, or evidence of materials used to measure and package heroin like a scale and/or many small individual bags.

In many cases, such as the recent arrest described above, possessing a large amount of heroin is the main factor used to justify charges under N.J.S.A. 2C:35-5 as well as to establish intent to distribute before a jury.

There is a presumption of incarceration for second and first degree possession of heroin with intent to distribute, but there is a presumption against incarceration for third degree possession with intent to distribute, if the defendant does not have a criminal history. In other words, a third degree heroin distribution charge means you may be a viable candidate for probation or the Pre-Trial Intervention Program, which results in a dismissal of your charges if you successfully complete the program. For first and second degree heroin distribution charges, a conviction requires a prison sentence unless you achieve a dismissal in court.

If you or a loved one has been arrested and charged with intent to distribute heroin in Union County, do not fight these charges alone. Contact Proetta & Oliver to have one of our experienced criminal defense lawyers review your case right away. You can reach our Cranford office anytime at (908) 838-0150 for a free consultation.