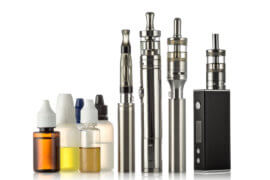 Vaping has become increasingly popular among teens and young adults and recently, there have been a number of respiratory illnesses caused by vaping. New Jersey has reported that at least 15 young people suffered from severe diseases related to e-cigarettes/vaping and more than 200 cases have been reported nationwide. This has caused the New Jersey Department of Health and CDC to seek reports and data from doctors and healthcare providers as it relates to vaping related illnesses. It appears that most of the illnesses were cause by vaping THC or nicotine. Despite the spike in illnesses, vaping or using e-cigarettes is not yet illegal in New Jersey, unless the item is filled with THC (marijuana) oil or wax. In fact, any product containing marijuana is illegal to ingest, possess, or vape if not medically prescribed in New Jersey. If you have been arrested for a drug crime involving marijuana or THC in a vape or e-cigarette, you should consult a knowledgeable attorney about your case and your options. Contact our experienced criminal defense attorneys to discuss your specific vape related charges and find out how we can help. With local offices in in Cranford, we represent clients throughout Union County and surrounding New Jersey areas. Please call (908) 838-0150 or contact us online for a free consultation.

A vaporizing pen is used to inhale or ingest an aerosol. Vape pens have three parts: 1) a liquid cartridge used to hold and produce the vapor (can contain nicotine or THC), 2) a heating component (atomizer) and, 3) a rechargeable battery necessary to enable the atomizer to heat and vaporize the liquid. The liquid in the cartridge can contain nothing more than a fruity flavor. It can also contain high or low levels of nicotine. E-cigarettes were originally marketed to smokers to be used in an effort to quit smoking. The levels of nicotine varied and smokers could theoretically lower the dose over time until they were no longer dependent on nicotine.

As e-cigarettes and vape pens became increasingly available, vaping marijuana gained popularity with teens and young adults. Despite popular belief, the possession of marijuana or vaping with THC is still illegal in New Jersey. In addition, possessing synthetic marijuana in any form is a fourth degree crime in New Jersey.

In the past, people would typically smoke marijuana in the form of a joint, bowl, or bong. The amount of the marijuana needed for this was relatively minor and the most common criminal charge impacting those smokers was a disorderly persons offense for possessing less than 50 grams of marijuana. This is not an indictable crime (felony) in New Jersey and people convicted are facing time in the county jail, as opposed to state prison for the offense. Now however, under N.J.S.A. 2C:35-5.3c, New Jersey considers it a fourth-degree crime to possess a vape containing THC or any form of synthetic marijuana. Synthetic marijuana is often available online or in stores, despite being illegal, which makes it easily accessible to most.

If you have less than one ounce of THC in an electronic cigarette, you will be charged with a fourth-degree crime. If convicted, you could be sentenced to up to 18 months in state prison. Not only is a person charged with violating N.J.S.A. 2C:35-5.3c exposed to imprisonment, but you may also be given a hefty fine, lose your driver’s license for a period of suspension, and be saddled with a criminal record.

If you have been charged with possessing marijuana or THC in a vape, you should retain an attorney with experienced handling these cases. Our skilled criminal defense lawyers thoroughly understand the laws pertaining to vaping and marijuana products, and we have assisted many clients in situations like these. In many cases, we can assist people in avoiding a criminal record, minimizing the penalties they face, or filed motions to suppress an illegal search in which drugs were found. Every case is unique and requires careful analysis. Contact our office today at (908) 838-0150 for your free consultation. We can defend you anywhere in Union County and New Jersey, including in Elizabeth, Cranford, Clark, Roselle, Linden, Springfield, New Providence, and Mountainside.