What are the Penalties for Illegal Gun Possession in New Jersey? 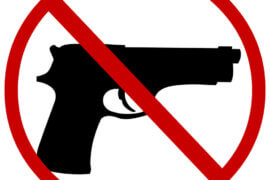 Getting caught with a gun without the proper New Jersey-issued permits in Union County is serious. If you own a gun legally, you usually have nothing to worry about when it comes to mere possession. However, if you are not permitted to own one, regardless of the type of gun, you may be in for a hard time. If you have not taken steps to apply for legal firearm ownership, you do not own a gun legally in the state of NJ. If you get arrested and are facing gun charges, you could go to prison for many years. This can become worse based on individual circumstances, especially if you are specifically prohibited by law from having a firearm based on prior felony convictions. Since a second degree crime conviction for illegally possessing a handgun possibly lands you in prison for 5 to 10 years and affects your future job, housing, and educational opportunities, your life rests in the hands of solid legal representation. Be sure to get help from a Union County criminal defense attorney right away for an illegal gun possession charge. There is simply no time to waste in devising the best strategy for your defense.

Penalties for Unlawfully Possessing a Firearm in NJ

Unlawfully possessing a handgun may be a matter of not having a permit at all, or not having one from the state of New Jersey. Similarly, unlawfully possessing a rifle or shotgun may be having either without a Firearms Purchaser Identification Card (FID). However, unlawful possession of a handgun is a second degree crime, which has a presumption of incarceration and a prison range of 5 to 10 years. Whereas, unlawful possession of a rifle or shotgun is a third degree crime. If you’re caught with a shotgun or rifle illegally, you may be convicted of a third degree crime and spend 3 to 5 years incarcerated. The ownership and possession laws that apply to lawfully possessing a handgun, rifle, or shotgun likewise apply to BB guns. Failing to obtain the right paperwork for a BB gun, you run the risk of being arrested and charged with a crime. BB guns possessed illegally are subject to third degree indictable criminal charges, as opposed to second degree like handguns.

Gun charge convictions are also subject to the Graves Act, which mandates a minimum prison term.

So, if you are charged with illegal possession of a handgun, for instance, you must serve 1/3 to 1/2 of your sentence or three years, whichever is longer, before you can possibly get out on parole. And prior convictions of Graves Act crimes increase the minimum term to minimally five years. For example, unlawfully possessing a machine gun, sawed-off shotgun, defaced firearm, weapons forbidden to certain people, and a firearm while selling or distributing drugs are Graves Act crimes.

Illegally possessing a gun as a “Certain Person”

This is a specific crime that includes having a firearm when you have a criminal history of crime or disorderly persons offenses, when you are addicted to drugs, when you are an alcoholic, or when you are a formerly committed patient at a psychiatric ward. In addition, if you have any physical or mental disability that would create a public hazard by your gun ownership, are under 18, or a suspected terrorist, you are also not permitted to possess a firearm. And if you have lost your firearms due to domestic violence or have convictions for certain enumerated first- and second-degree crimes that require mandatory minimum sentences, such as murder, terrorism, kidnapping, aggravated sexual assault, and burglary, among others, you cannot legally have a gun. This is a second degree crime in New Jersey when it involves a firearm.

If you are not prohibited from getting a firearm, you may be able to legally obtain one.

To legally obtain and possess a firearm, you must get permission from the state. That entails applying for a Firearms Purchaser Identification Card (FID) for permission to purchase and possess rifles and shotguns. To own a handgun, however, you need a permit also. Specifically, you need a Permit to Purchase a Handgun in order to do so. Both of these must be applied for and issued by the state of New Jersey. With the FID, you can protect your home or business with a rifle or shotgun. With a handgun purchaser permit, you can protect your home and business with a handgun. You cannot, however, carry a handgun on your person without a state-authorized handgun carry permit.

You can get into legal trouble for improperly storing and transporting guns.

You can take your firearms with you to and from certain allowed locations, so long as they are locked up while in transport, in a separate part of the vehicle that you cannot access from the main compartment, and the bullets are kept in a separate place from the firearms. Firearms may not be taken from a home or business without placing the gun in locked storage away from its ammunition. If you get pulled over improperly transporting a gun, you will likely find yourself arrested and facing serious consequences in the criminal justice system.

Hire a Gun Lawyer to Defend Your Case, Contact our Office in Cranford NJ

While the laws seem straightforward, life circumstances are not always clear, nor are New Jersey criminal cases involving firearms. You could not be charged with illegally possessing a firearm for a host of reasons under a broad range of circumstances. And it makes a difference if the gun was inoperable and did not work, or you had a permit from some other state. Also, your charge may be dismissed, reduced, or negotiable if the arrest or discovery of the gun was questionable. The police may not have had reason to stop you before discovering the firearm, or they may have obtained it by an illegal search without probable cause. In other words, knowing the law is necessary to your defense. That is only one reason to arm yourself with a good local criminal defense attorney when facing illegal gun possession charges in Union County.

You should consider speaking with a criminal defense lawyer who is deeply familiar with the law, courts, and prosecutors, which can all be to your advantage. Contact our office in Cranford at (908) 838-0150 or online for a free consultation if you have been arrested for a gun recently anywhere in the Union County, NJ area.