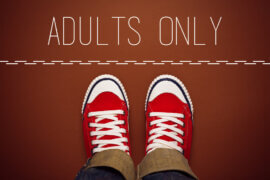 When a minor gets into legal trouble, the community often takes responsibility to address the problem. The local police may advise the youth or call the youth’s parents to counsel and discipline the child. Community outreach organizations for troubled youth may play a part, and neighbors may watch out for the minor, especially if the trouble is typical mischief kids get into to test their boundaries. The hope is for a young person to learn a lesson, grow up, and move on from their mistakes. Unfortunately for juveniles, not all legal troubles are considered minor, and not all children have the opportunity to avoid severe punishment when accused of committing crimes that bring them into the judicial system. In fact, some juveniles can even be charged and prosecuted as adults in New Jersey for alleged violations of the state’s stringent criminal laws.

Aims of Juvenile Courts vs. Adults Courts in New Jersey

Each state’s criminal laws seek to punish, deter, protect, and rehabilitate. In New Jersey, the criminal code punishes those who would intentionally or recklessly harm other members of society. Criminal sentences mean deterring crime, rehabilitating convicted criminals, and confining those who are apt to commit a crime (N.J.S.A. 2C:1-2). These judicial aims of the criminal code apply to adults. In the juvenile justice system, however, the aims are more nurturing and rehabilitative than punitive. The system seeks to partner with families to provide wayward youth with care, supervision, and rehabilitative services to promote accountability and public safety (N.J.S.A. 2A:4A-21). The hope is to help children turn their lives around by supplying strict guidance and the resources they may need. Unfortunately, however, some juveniles are charged with more extreme indictable crimes (felonies) that cause significant harm to individuals and thus, pose a threat to society. In these cases, they risk a prosecutor seeking a waiver of the juvenile case into adult court, where the consequences of a conviction substantially worsen.

What Happens at the Beginning of a Juvenile Case

All juveniles who allegedly violate the law in New Jersey are subject to the juvenile court system. Upon being taken into custody, an officer determines what is best under the circumstances, release, reprimand, or complaint and detention. If an officer files a complaint to decide juvenile delinquency, court administrators examine the nature of the violation and circumstances to inform the Family Court at the initial detention hearing. Serious juvenile offenders may stay in a juvenile detention center pending the hearing. The first hearing determines probable cause for the detention or charges, followed by review hearings and an eventual adjudication hearing where the judge determines delinquency. Most juveniles are released into parental custody and supervision, except for more severe cases. A juvenile court has wide latitude to customize sentences for juveniles depending on what they need to decrease the odds of returning to the juvenile system.

For some juveniles charged with criminal offenses, they may have a lengthy criminal history already. For those offenders, the juvenile system may be a revolving door. Others with no record of trouble with the law are presumed to become public dangers, especially when crimes escalate. As such, a county prosecutor may seek to try a juvenile as an adult for what are considered horrendous crimes. These include murder, robbery, carjacking, leading an illegal drug operation, kidnapping, second degree aggravated assault, sexual assault, possessing a firearm for an unlawful purpose, causing a drug-induced death, and aggravated arson. However, to prosecute a juvenile as an adult, the prosecutor must first get a waiver from the juvenile court jurisdiction to the adult criminal court jurisdiction.

The Process to Obtain Juvenile Waivers to Adult Criminal Court

Once the prosecutor’s office gets involved in a juvenile case, they have 60 days to file a motion for an involuntary waiver in superior court, family division. In their motion, they must affirm that the juvenile is at least 15 years old and has committed one or more of the serious crimes that subject them to a waiver. Then, the family court judge in the jurisdiction where the crimes occurred grants or denies the waiver motion based on specific factors. The court must weigh numerous variables, such as the nature of the charges, the circumstances of the criminal acts, and what was damaged, people or property. Obviously, harming people is more serious than property.

Consequences for a Juvenile being Tried as an Adult in NJ

Considering these factors, the family court judge understands that a waiver means a 15-, 16-, or 17-year-old may go to prison with nearly all older adults for years, possibly decades to almost a lifetime. The consequences are dire, not only for the youth’s safety but also for probable rehabilitation. Youths living among hardened criminals are more likely to suffer physical and sexual abuse, increasing the likelihood of suicide. So, the juvenile system would evaluate a youth throughout the process to customize the punishment to their needs for rehabilitation. However, the adult criminal justice system does not focus on rehabilitation as much as punishment and containment. Thus, only specific individuals qualify for diversionary rehabilitative program sentencing, such as first-time offenders. And, if incarceration in a juvenile detention setting is the most appropriate sentence to safeguard the community, the detention is not as lengthy as a criminal sentence for most adult crimes.

Child being Charged as an Adult in Union County NJ? Contact our Office to Speak to an Attorney

Since a youth convicted as an adult receives the same sentence as an adult defendant (except for life without parole), the most critical consideration for a juvenile and their family is how to avoid a granted waiver. The first step is to hire an experienced juvenile criminal defense attorney with thorough knowledge and expertise in defending against involuntary juvenile waivers. An aggressive attorney who can successfully challenge the prosecutor’s characterization of their client as an unredeemable criminal is necessary to protect your child in the face of the worst case scenario in the eyes of the law.

If your child stands to lose their life chances to a waiver motion, find the right attorney for them and get the answers you need to move forward by contacting our law office in Union County, NJ for a free initial consultation. When your son or daughter needs an advocate in their corner, we can help. Call (908) 838-0150 today to discuss your juvenile case with one of our talented juvenile defense attorneys.