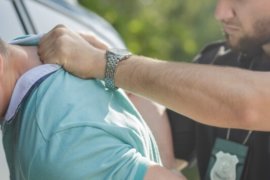 Clark, New Jersey is a great place to live, work, or raise a family. The township makes it easy for residents to live here by providing a safe environment, a prime location for traveling to work, and a multitude of retail establishments that makes it easy to access what you need in a snap. Nevertheless, when the quality of life is disturbed or threatened by criminal acts such as shoplifting, Clark Township Police officers stand ready to make arrests. Stores like Target, Marshalls, and Shoprite, located in Clark Commons, are frequent spots for shoplifting offenses in the township. Plus, the well-funded police department is encouraged and motivated to investigate acts of shoplifting and facilitate the arrest and prosecution of accused shoplifters. Officers are attuned to schemes and plans to defraud these retail establishments, as well as smaller mom and pop shops along Westfield Avenue.

Depending on the value of the items that the police allege you stole or attempted to steal in Clark, you are facing criminal charges in the second, third, or fourth degree degree or, have been charged with a disorderly persons offense. The degree of the shoplifting charge could mean the difference between a simple fine or time spent in state prison. Our local attorneys are familiar with both Clark Municipal Court, Union County Superior Court, and the various types of shoplifting cases heard in each. To discuss your case with a Clark shoplifting defense lawyer who is well-versed in the laws and strategies available to reach better outcomes, call us today at (908) 838-0150. Consultations are provided at no cost to you.

Anytime someone sets out to deprive a store or retail establishment of money owed for an item listed for sale, he or she can be charged with shoplifting. The crime occurs when you allegedly:

The one thing that all shoplifting cases have in common is that the defendant must be shown to have the intention to take something of value from the retailer without paying the full value. Frequent allegations include leaving the store without paying, hiding items under clothing or in storage bins, scanning some items while not scanning others at checkout, or shoplifting in groups while one person distracts the store while others take items and head out an emergency exit or back door. Other times, the person charged never actually took anything of value and may have left the items in the store. Even if you never took items, you can still be charged with a shoplifting offense if the police allege that it was your intention to take merchandise without paying.

For example, we have represented many people who have been charged with shoplifting that have never received or taken anything of value. The accusation usually includes facts alleging that the person loaded the cart, hid items in the cart, and then attempted to leave the store but left the cart in the store. The clients are left wondering how they can be charged if they never removed the items from the building. Often, the store employee’s explanation is that they watched the person on camera conceal items or attempt to leave without paying, but that they were then confronted by a store employee or security personnel before heading out the door. The stores argue that, only after they caught the person red-handed, did the would-be shoplifter leave the items behind. In these cases, the prosecutors will argue that it was your intention to shoplift and that you only abandoned the cart to avoid capture.

While this may be true in some cases, it is certainly not always factually correct. For some, the attempt to shoplifting may be abandoned, as the person changed their mind. This is true in many shoplifting rings in which groups of shoplifters assign different roles to individuals with the purpose of taking massive amounts of goods without paying. Sometimes, an individual associated with conspiracy to commit theft, takes steps to stop the crime or disassociate with the offense. This can be a defense to shoplifting and there are many others. In some situations, a practical explanation can be offered, issues with the evidence are revealed, or it was a simple misunderstanding evidenced by the person’s lack of intent and no prior criminal history. Whatever the case may be, we can help parse the information to establish the facts that help you.

Charged with Shoplifting in Clark NJ, What am I Facing?

At the end of the day, if you are convicted of shoplifting, your sentence will depend on the degree of the charge, which is likewise dependent on the proven value of the items taken. Shoplifting is either an indictable crime or a disorderly persons offense. If the value of the items is less than $200, you will be charged with a disorderly persons offense and will be heading to Clark Municipal Court where the court can sentence you to a maximum 6 months in jail, $1000 fine, probation, and restitution.

Being accused of taking items valued at $200 or more can lead to shoplifting charges for an indictable crime. If such a complaint is filed, the case is heard in Union County Superior Court. Here, the degree and sentence depends on the value of the items which is as follows:

Some offenses require mandatory punishment, while others give the judge wider latitude in sentencing. For instance, if this is your third shoplifting offense (or more), you must serve at least 90 days in jail if convicted and must complete community service. There are other potential mandatory penalties that cannot be excused. For instance, for cases of the second degree, unless the charge is downgraded to one degree less, your lawyer negotiates a plea deal, or you receive entry into a diversionary program, state prison is a part of your sentence. On the other hand , judges can sentence you to probation without jail for a third or fourth degree crime if you have never been convicted of an offense before. You may also be eligible for Pre-Trial Intervention or another option based on your record and the degree of the shoplifting charge.

Need a Lawyer for a Clark, NJ Shoplifting Case?

When charged with a shoplifting crime in Clark, you can use some help, and seeking advice of counsel from those with experience can prove extremely beneficial. Whether we end up arguing for a lesser sentence, disputing a key part of the prosecution’s case, assisting you with applying for PTI or conditional dismissal, or litigating your case via motions and trial, our lawyers will go the extra mile for you. Contact us at (908) 838-0150 to speak with an experienced defense attorney free of charge today.