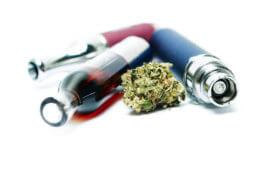 Our marijuana defense attorneys recently defended a client who had been charged with possession of marijuana and drug paraphernalia after cops showing up to their room because someone in the building called after smelling marijuana smoke in the hallway. A subsequent search by the police officers turned up multiple items of drug paraphernalia including a grinder and vaporizer as well as a quantity of marijuana, some of which was found in our client’s jacket. Based on the above facts our client and his friend were charged criminally.

Our client was a first time offender and would have been eligible for the conditional discharge program that typically involves 12 months of probation and random drug testing. The program can ultimately end in a dismissal of all charges if the defendant does not have any violations during this time period. However, you can only receive the benefit of any diversion program in New Jersey one time your whole life so we never like to do this as our first option and always fight to have the charges dismissed based on a lack of evidence or procedural issue first. So that is exactly what we did here – our attorneys began aggressively defending the case over a 7 month period of litigation and court appearances by making multiple requests for missing evidence that we believed the state needed to prove the charges against our client and his friend. Eventually we prepared a court order and successfully argued that the judge sign it giving the prosecutor and state and limited time to produce the already delayed evidence. On the last court appearance the prosecutor had still not produced the missing evidence and we argued that the judge had no choice but to dismiss the charges against our client based on his speedy trial rights and lack of prosecutor. The judge reluctantly agreed and dismissed all the charges against our client. He was able to walk out of court without having to pay any fines and is now preparing to hire us again for his expungement to remove all records that the arrest ever happened. If you or your loved finds yourself in a similar position after a marijuana arrest, give our criminal defense lawyers a call today for a free and confidential consultation.