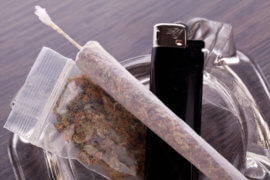 Union Township police take a hard line on drug possession, distribution, and paraphernalia charges. You can be arrested and face serious criminal charges for any number of controlled dangerous substances (CDS) in Union Township, NJ, as well as everyday items deemed “drug paraphernalia.” Although you might expect a drug charge to be relatively minors, these crimes entail serious penalties that worsen when the amount of drugs increases or simple possession crosses the line into intent to sell. To potentially avoid these consequences, you need qualified legal guidance and aggressive defense representation from an attorney experienced in handling drug cases in Union County. For a free consultation with a Union Twp drug lawyer who understands your predicament and knows how to protect your interests, call us at (908) 838-0150 or contact us online now.

New Jersey drug possession laws are incredibly broad, and prosecutors and police enforce these laws aggressively. You can face a third-degree indictable offense for possessing even just trace amounts of heroin, cocaine, meth, or similar drugs. For example, you have a mirror in your car that you use to snort cocaine, and police find trace amounts of cocaine on that mirror, or on dollar bill or other similar everyday item, you can face both possession of drug paraphernalia charges and an indictable offense for drug possession. Some of the most common drug charges issued in Union Township include:

The penalties for possession of even trace amounts of controlled dangerous substances can include three to five years in prison and tens of thousands of dollars of fines. It is no defense that the quantity of the controlled substance found was small. Notably, the one exception to this rule is marijuana. The guidelines for grading marijuana offenses are unique among other drug charges. Specifically, if you have under 50 grams of marijuana, this is a disorderly persons offense that will be handled in Union Township Municipal Court and is subject to up to 6 months in the Union County Jail. Most other drug possession charges are considered third degree indictable crimes. However, larger amounts of drugs may lead to upgraded charges for drug distribution, which entail harsher punishments and can even results in decades in prison, depending on the amount of the substance involved.

People are arrested and charged with possession of drug paraphernalia for carrying even common, everyday items like spoons or mirrors (depending on the circumstances), and you can even by charged with drug possession if trace amounts of drugs are found on such items.

New Jersey law criminalizes the possession of any object related to the transportation, storage, manufacture, production, packaging, testing, ingestion, inhalation, or any other type of introduction into the human body of a controlled dangerous substance. This law is incredibly broad. If police have probable cause to conclude that you have used an objection in connection (broadly defined) with a drug, you can be arrested for and prosecuted on a drug paraphernalia charge. The law reaches far more objects than just the usual suspects (e.g. bongs, syringes, and crack pipes). It can apply to spoons, balloons, mirrors, baggies, rubber tubing, dollar bills, and containers of all types—almost as many items as you can imagine.

Prosecutors must simply prove that you intended to use the object to help you take or distribute a controlled dangerous substance. For example, if you have been inhaling nitrous oxide using a compressed tank and balloons, those balloons (in addition to the nitrous tank itself) can support drug paraphernalia charges. The penalties for a drug paraphernalia conviction can be serious. You can receive up to six months of jail time and fines up to $1,000. A conviction will also show up on your criminal record, making it harder for you to find a job or qualify for certain government benefits, among other difficulties.

Looking for a Union Twp Lawyer for a Drug Case?

If you have been arrested and charged with drugs, consult an experienced Union Township criminal defense attorney at our firm and find out what you can do to fight your case. Our lawyers will investigate the circumstances surrounding your arrest to identify the best defenses. We know that sometimes a spoon is just a spoon, the drugs simply aren’t yours, or police may violate your rights in the course of a search or investigation, and we can use this to your advantage.

You can reach us 24/7 for an absolutely free consultation by calling (908) 838-0150 or contacting us online. We appear frequently in Union Township Municipal Court and Union County Superior Court on behalf of clients charged with drug crimes. Get the help you need today.