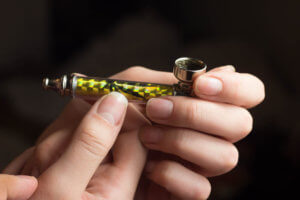 Possession of synthetic marijuana is an indictable crime in the State of New Jersey. If you see the word “indictable” or “degree” anywhere on your complaint, it means you are being charged with a felony. The degree of the crime is determined by the amount or weight of synthetic marijuana that was allegedly in your possession. While charges for typical possession of marijuana are graded relatively less harshly than other drug possession offenses, synthetic marijuana is viewed as a more dangerous controlled dangerous substance. Thus, the grading of these offenses is more extreme. Essentially, you will be charged with an indictable offense regardless of whether you possessed a small amount of the drug for personal use or a large quantity for distribution. As with other drug charges, the potential penalties increase as the amount of the drugs involved grow and mere possession becomes intent to distribute. If you have been charged with a synthetic cannabinoid offense in Union County, including in Clark, Cranford, Elizabeth, Linden, Roselle, Mountainside, and Summit, our criminal defense attorneys can help. We have over ten years of experience defending clients charged with marijuana and other crimes in courts throughout Union County and New Jersey, with a continued commitment to providing the best possible defense. To talk through the circumstances of your arrest and find answers to your particular inquiries, call (908) 838-0150. Consultations are free and provided 24/7.

Possessing synthetic marijuana even in the most minuscule amount is a fourth degree indictable felony crime in New Jersey. After the police confiscate the contraband, they take it to the state laboratory. The weight and the chemical nature of the substance are proven through testing in a state laboratory thereafter. The lab report will contain a description of the chemical compound(s) and how the substance is or is not synthetic marijuana. Synthetic marijuana, unlike organic marijuana, is not a naturally occurring substance and is instead, chemically produced. Although the substance generally looks like weed, it is not weed at all. Synthetic marijuana may be a collection of unknown substances saturated with chemicals. These chemicals are mind-altering and can have unpredictable and disastrous effects on those who ingest them. They can be kept in a vegetative form for smoking or liquid form for vaping.

In fact, New Jersey adopted additional measures allowing for anyone to be charged with a violation of this statute for possessing THC in a vape pen. As you may be aware, THC is the primary psychoactive component in marijuana. Thus, you may be charged with a fourth degree crime under the synthetic cannabinoid law if found in possession of marijuana in an electronic cigarette. Likewise, possessing less than an ounce of Synthetic Marijuana (K-2, Spice, etc.) is a fourth degree crime. This is true whether you smoke it or vape weed in any form. This degree of criminal offense allows the court to sentence you to a prison term not to exceed 18 months. If you possess more than one ounce, the degree of criminal charges increases to a third degree crime. When facing these charges for synthetic marijuana, you risk being sentenced to prison for 3-5 years for possessing even slightly over one ounce. The fines for each of these offenses are severe and you can pay tens of thousands of dollars, specifically $10,000 for a 4th degree and upwards of $15,000 for a 3rd degree.

Additionally, charges for manufacturing, distributing or dispensing, or possessing with intent to manufacture, distribute, or dispense a synthetic cannabinoid may be filed if there is evidence to suggest distribution or larger quantities of the drug. Specifically, offenses involving one ounce or more are second degree crimes, with punishments including 5-10 years in prison. When the quantity involved amounts to less than one ounce, the charges become third degree and the prison term maximum is 5 years.

Are there Defenses for Synthetic Marijuana Offenses in Union NJ?

Sometimes, the person charged with synthetic cannabinoids or other substances exclaims to the officer: “I did not know it was illegal!” Unfortunately, ignorance of the law is not a defense in New Jersey criminal cases, including those involving drugs. However, there are defenses that may be available when facing drug charges for N.J.S.A 2C:35-5.3b or c. In other words, depending on the facts and circumstances unique to your case, there may be effective ways to defend you in court. Once such a way is to file a motion to suppress the evidence. Everyone in the United States has a constitutional right to privacy and against unreasonable searches and seizures. Specifically, under the Fourth Amendment, everyone’s right to privacy extends to “their persons, houses, papers, and effects.” Before an officer can search certain areas, they must either have a search warrant or provide an exception to the search warrant requirement. Basically, your backpack, home, purse, car, trunk, house, apartment, yard, clothes, or anything else belonging to you cannot be arbitrarily searched.

However, an officer can search for contraband such as a controlled dangerous substance under certain circumstances. If an officer has probable cause to believe that an offense has been committed or is being committed, they can search your surroundings. Often, this comes into play during motor vehicle stops in which the officer becomes suspicious that something criminal is underway. Eventually, after a stop, they may discover contraband such as synthetic marijuana. Despite this, the law requires them to demonstrate in the police report and through testimony that the search was lawful. For example, say a State Trooper is patrolling the Garden State Parkway, Route 287, Route 22, or maybe route 78, and he sees you and your three friends driving by. He decides to pull you over for any reason such as speeding, failing to keep right, or failing to maintain your lane. Once pulled over he approaches your passenger side window and asks for your license and registration. While you are answering his questions, he is looking around the car, eyeballing your friends, and taking it all in. He may ask things like “where are you headed?” or “where are you coming from?” He is likely trying to assess the situation and to see if there is anything suspicious about you and your cronies. At some point, he has you step out of the car and asks you further questions. Then he moves on to the others, and eventually he searches the car and finds synthetic marijuana. He arrests you and the others because no one will own up to it belonging to them.

The lingering question for an attorney is what gave him the right to get you out of the car? In reviewing the police report, the officer’s reasoning for pulling you over and getting you out of the car should be clearly set forth. In this situation, he notes that you pulled over and compiled but that when he approached the car, he saw the backseat passenger reach down and he looked to be shoving something under the seat. When he came to the passenger side, he looked at the backseat passenger who would not make eye contact. The cop then saw a bunch of clear plastic baggies sticking out from under the seat and some shake in the console and on the ground. He believes that there are drugs in the car and he gets everyone out based on the fact that he thought a crime was being committed (possession of CDS) and that the vehicle contained illegal contraband (drugs).

Often, when your lawyer gets the report, they find discrepancies in what actually happened. For instance, we will review what you say against both the officer’s reports and the video evidence. On numerous occasions, we have been able to discredit the assertions of the officer and ultimately, to invalidate some component of the prosecution’s case. This can often be accomplished by proving that the officer really had no probable cause to search you or your car. If the judge believes that the officer wrongfully searched you and/or your property, the evidence gathered as a result of the search will be thrown out and cannot be used against you. This is called a suppression of the physical evidence. If the judge finds that the officer did lawfully search you and seize the evidence, the charges will remain, necessitating another pre-trial defense strategy, diversionary option, or taking the case to trial. Our Union County criminal attorneys are prepared to assist with developing and carrying out the best strategy for your case.

The crime may seem relatively minor in comparison to others, but synthetic marijuana charges can still have a dramatic impact on your life. Convictions for indictable crimes impact people by being identified on their criminal records, visible to employers, and possibly made known to potential landlords, banks, and others. Even being placed on probation reduces your control over your life, as you are forced to comply with the rules of the court no matter how arbitrary or seemingly unattainable. But take heart, as simply being arrested for synthetic marijuana does not necessarily mean you cannot avoid the consequences you now face.

At our Union County NJ criminal defense offices, our lawyers can help to explain in more detail the effects that a synthetic marijuana possession or distribution charge can have, defenses and diversions that may lead to success in your case, and how our knowledgeable and skilled intervention can be used to obtain your best result. Whether you are facing drug offense charges in Westfield, Clark, Scotch Plains, North Plainfield, or elsewhere in Union County, contact us at (908) 838-0150 today for a free consultation.