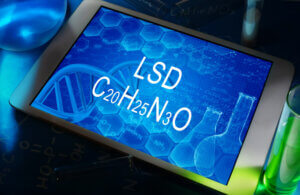 New Jersey is determined to eliminate illegal drug problems in the state. From strict criminal penalties for possession of controlled dangerous substances (CDS) to placing distributors and traffickers behind bars for a long time, the state punishes illegal drug violators with some of the harshest sentences in the nation. This applies to a drug like LSD, which has seen a resurgence in recent years. LSD, or lysergic acid diethylamide, is a schedule I CDS sometimes referred to on the street as acid, dots, or Lucy. It is a synthetic drug based on a substance found in a grain fungus, and it is a psychedelic, like psilocybin (mushrooms) or peyote. People take it to recreate, have visions, or have spiritual experiences. With enough of it, the drug can cause hallucinations, distorted vision, flashbacks, and depression. With regular use, LSD can cause ongoing psychological and physical problems in the user. For example, LSD activates serotonin, which triggers the sympathetic nervous system, otherwise known as the fight or flight response. It can also have long-term flashbacks, which can throw a person back into a hallucinogenic state or create paranoia. Thus, a bad trip can have psychological after-effects for a long time. On top of that, an arrest for possession or distribution of LSD can have lasting damaging effects for your personal, professional, and financial life.

If you have been charged with a crime involving LSD in Union County, New Jersey, you need to speak with a criminal defense lawyer experienced at defending drug cases as your earliest opportunity. The attorneys at The Law Office of Proetta & Oliver are extensively prepared, knowledgeable, and tested in the criminal courts of New Jersey, having been defending clients charged with drugs and other crimes for over a decade each. When you need an aggressive defense counselor fighting for you, count on us for help. Contact our office for a free consultation at (908) 838-0150 and talk to a lawyer right away who can give you answers and discuss your options now.

LSD is a Schedule I CDS that is unlawful to have or distribute. A Schedule I CDS is listed as the federal and state government’s (Controlled Dangerous Substances Act) most dangerous for abuse while serving no acceptable medicinal purpose. It is illegal to possess (NJSA 2C:35-10) or manufacture, distribute or dispense LSD (NJSA 2C:35-5). If the police catch you with a Schedule I CDS like heroin, ecstasy, or LSD, you could be charged with a third degree crime and convicted for CDS possession, meaning you may be sentenced to prison for at least 3 years and up to 5 years. You could also pay a $35,000.00 or more fine and lose your license for six months to two years.

It is also unlawful to have LSD with the intent to make or sell the drug. For LSD distribution or possession with intent to distribute charges, the punishment correlates to the amount of the drug in your possession at the time of the arrest or search, or the amount you sold or distributed. Distributing 100 milligrams or more of LSD is a first degree crime. If convicted, a defendant could face 20 years in prison and a $500,000.00 fine. Having, making, or selling less than 100 milligrams is a second degree crime punishable by up to ten years in prison and a potential $150,000.00 fine. For possession with the intent to distribute a half-ounce or less of LSD, a conviction could have you serving up to five years in prison and paying as much as $75,000.00 in fines for a third degree crime. Furthermore, enhanced penalties come with distributing in or near a school or selling in a park zone.

It only takes a small amount of LSD to feel its powerful effects, and it is typically sold on paper or sugar cubes, as it is odorless and colorless. It can be sold as a liquid too, which a user can inject. Commonly, it is ingested, snorted, or injected. Taking too much of the drug can be fatal, though overdoses are rare. Anyone who causes another’s death by selling or giving them LSD violates NJSA 2C:35-9, a first degree crime of causing a drug-induced death. Causing another’s death by drugs is a strict liability crime. Thus, it is no defense to the crime that the user took too much LSD.

Though the penalties for making and selling Schedule I drugs are strict, New Jersey no longer imposes mandatory minimum sentences for certain non-violent drug crimes, including possession, manufacture, distribution, or dispensing. However, penalties are steep enough for those who maintain or operate a CDS production facility, including the manufacturing premises for LSD. This is a first degree crime, which is a separate crime from manufacturing, distributing, and dispensing LSD. The maximum fine is $750,000.00 for this offense. Feasibly, an offender could be convicted for possessing, selling, and producing LSD, in addition to leading an LSD trafficking operation. Add to that the first degree crime of inducing another’s death with LSD, and the convicted defendant faces a potential life sentence.

Once you discuss your case with a criminal defense attorney, you can describe how the police found the LSD and connected it to you. Your attorney will want to know how the police searched you, your home, vehicle, or other location to get the LSD and other evidence against you. When you tell them your story, they will listen for the details that may indicate the police may not have had probable cause to stop you in your vehicle where the police seized the drugs. There may be a question of whether the drugs were in your possession. They will question you whether the police read you your rights prior to interrogating you.

They may ask you what else the police seized besides the LSD. Your attorney wants to know if the prosecutor files mere possession or possession with the intent to distribute charges. As such, they will want to see if you had a lot of cash or other items to suggest the drugs were for sale. If the drugs and money were all that the police collected, your attorney might press the prosecutor to reduce the possession with intent to distribute charge to a straight LSD possession charge. They may further explore and investigate the search and seizure method, by pat-down or vehicle search, for example, and whether the police made mistakes. Mistakes often happen, with unlawful searches, flawed line-ups, and faulty lab analyses of drugs or chemical tests. In other words, an attorney defends you by protecting your rights to due process, a skillful defense approach, and a fair trial.

Count on Help from LSD Defense Attorneys in Union, NJ

Getting caught possessing, producing, or selling LSD can change your life drastically. Even if you did not intend to distribute LSD, the amount of the drug in your possession might indicate an intent to sell it, especially if other signs of an intention to sell accompany the drug, like large quantities of blotting paper or sugar cubes. Thus, if the police arrested you for having LSD, you may believe there is little to do. However, our seasoned and proven Union County criminal defense attorneys can assist you. We know all too well how prosecutors can sometimes have their cases thrown out, charges dismissed or reduced, and jury verdicts of not guilty. Contact us if you are facing LSD possession or distribution charges in Cranford, Elizabeth, Clark, Westfield, Linden, Rahway, Roselle, Springfield, Kenilworth, or surrounding towns. You can reach us 24/7 for a free consultation. Call (908) 838-0150 to speak with a member of our defense team who can help you through your LSD prosecution.